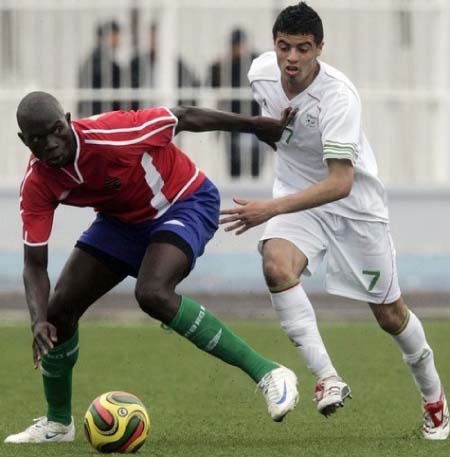 Wallidan left back Omar Colley, commonly called O.J, has been named ‘the most outstanding player’ of the just ended Super Nawetan championship.

The lanky defender won the prestigious accolade after guiding Lamin to a historic Super Nawetan title success for the record 2nd time.

The former Gambia national U-17 influential figure, who also graduated through the ranks of the U-20 national team, was both the head and the heart of Lamin outfit’s success. His impressive performance therefore earned him the tournament’s best player accolade.

The award was presented to him by Alhajie O.B. Conateh, honorary life president of the Gambia Football Association, on behalf of the association.

Colley received the honour after helping Lamin beat Sukuta 2-nil in a heated zonal final played at the Independence Stadium in Bakau at the weekend as Kombo North giants rounded off a fantastic super nawettan campaign with pride.

Upon receiving the top accolade before an impressive crowd at the Independence Stadium including the nosy travelling Lamin fans on Sunday evening, the former Sporting Kansas trialist in the MLS could not hide his happiness, having claimed the most important award of his life to date.

Speaking to Pointsport shortly after receiving the top prize, Colley said he has been working tirelessly to help Lamin win the trophy. “I feel I am the happiest man on earth because I have never won such an important award in my life. Even whereas I did not win this individual award, I am happy to help Lamin win the title, which is the primary objective of the tournament,”  says the rocky left back Colley who went on to dedicate his award to his mum and fans.

Lamin’s spectacular super nawettan campaign has also seen them win the top scorer award, given to goal poacher Haman Conteh, while Conteh’s teammate Modou Jarju received the tournament’s best goalkeeper award in recognition of his magnificent performances throughout the competition.

Serrekunda Central won the most disciplined team award while Banjul, who emerged as third place winner, were also decorated with medals.