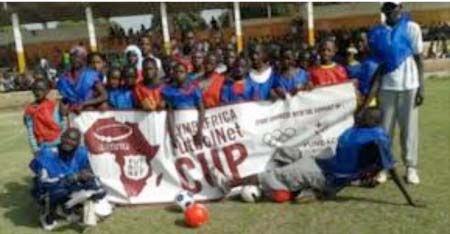 The fifth Futbolnet program  will kick off today at Serrekunda East mini stadium where 30 schools will take part. The event will start from today 19 to 21 May  2017 .

Futbolnet is a by-annual programme organised by Olympafrica centres in Africa. This programme is a new kids football programme concived by the people of Barcelona Football Club.

The programme was in existence in Barcelona for many years and they decided to expand it to Europe and Africa where key institutions are being  identified  to partner with OlympAfrica  Centres the key partners in the programme.

It is a new progamme, OlympAfrica Centres but now it become the most actractive programme in centres  of Olympafrica  where most children especially in Serrekunda East OlympAfrica  centre,  enjoy and want to be part of  the programme.  The  formation is that a team is made up of seven players - 5 boys and two girls - with a timer who records and acts like referee but doesn’t interfere until after the game where he/she listens to both teams’ players and after he/she does  the jurgement according to his /her observation.

However ,when the programme was concived and agreed upon to be part of  Serrekunda East OlympAfrica annual programme , committee or the board members  sit and discuss,  we mantain  the targed School we normally do programme  with. After which all those considered are  communicated and ask to come for a meeting where they are introduced to the programme and alongside it a training workshop is done for both the members and teachers  to understand  and to  know what Fulbolnet is all about .

Every year we invite  more than 25 schools  with upper  basic and lower basic schools within KMC who are target  partners for development of  kids and children sports within the Minicipality.

OlympAfrica  Serrekunda East is here to educate,  entertain, and  develop sport  in all areas. We also nuture school dropouts to help them became better youths in future. We do this by also inculating and cansuling them  so as to avoid the dengers of the present sitution and the happenenings  in the world of today.

Well worth the effort