Executive committee members of the National Tourist Guides Association, NTGA, are appealing for help; and have talked to The Point to highlight their plight.

They have received a demolition notice for the building they use as an “office”.

They were asked to have it demolished “before [Wednesday] 20th August 2014”. It is located in front of the Senegambia-Kairaba hotel roundabout.

Jobe explained that the national official tourist guides scheme was established in 1997 by the government in consultation with tourism stakeholders, as part of providing efficient and quality services to visitors to the Smiling Coast.

He added that the scheme has been a success story, as many tourist guides succeeded in going on to embark on their own business, while other lucky ones went for overseas studies.

Jobe said the scheme has contributed to youth empowerment and national development, as the association has paid D24,000 to Gambia Tourism Board, GTB, as annual license fees, as well as contributing a lot in education, health, agriculture and fisheries since inception in 1997.

The NTGA officials are alleging that Senegambia Beach Hotel wants to take over the place where their office is located “for their business gain with support from Gambia Tourism Board and the Ministry of Tourism”.

Mr. Jobe further announced that the two institutions, Senegambia Beach Hotel and the Gambia Tourism Board (GTB), “are on the verge of relocating us and demolishing the office”.

Meanwhile, The Point has seen two letters sent to the “Official Tourist Guides, by the GTB and the Department of Physical Planning and Housing in Banjul.

The letter from the Physical Planning authorities was entitled: “Notice requiring removal or demolition of building/fence erected without a development permit or declared unsafe”.

Dated 15 August 2014, the letter of notice was addressed to the Tourist Guides Senegambia.

The notice stated that the “office” of the Tourists Guides at Senegambia (see photo) “has been erected without a Development Permit and without the prior approval of the Physical Planning Authority under Development Control Regulations 1995”.

It added: “Take further notice that upon failure on your part to comply with this Notice, the Planning Authority will arrange for the building to be removed or demolished and charge the cost of such removal or demolition to you”.

The Gambia Tourism Board, GTB, in a letter sent to the “Official Tourist Guides Senegambia” and entitled “Relocation from Current Premises” stated that a letter was sent to Mr. Jobe “in July, advising you of the handing over of the newly completed OTG (Official Tourist Guide) Post built by Senegambia Beach Hotel, which was to take place on 7th July 2014.”

The letter mentioned “your (Jobe’s/the NTGA’s) refusal to participate in the handing over ceremony, and went on to announced that “you would be served an eviction notice, and following which you are to vacate the currently occupied premises and move to the newly-built premises. We also advise that you move all your belongings by the expiration of the notice period.

“Failure to move by the end of the notice period would result in demolition of your existing premises”, the GTB letter warned. 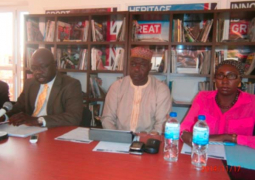 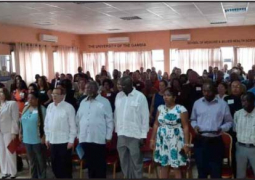