Kumba Njie, the defendant’s witness and the executive chef of Ocean Bay Hotel, yesterday continued her testimony under cross-examination by the plaintiff, Mama Cham Deen, before the Industrial Tribunal at the Kanifing Magistrates’ Court.

The plaintiff filed a suit against the defendant, claiming the sum of D250, 000 being damages for breach of contract, cost and as well as interest of 25% for wrongful dismissal.

Continuing her testimony, Kumba Njie denied that the reasons for the plaintiff’s termination were a false allegation, a set up and jealous.

When asked by the plaintiff to give names of kitchen staff that informed her that she (the plaintiff) used to take items, the witness declined, adding that they were many and she could not bring them to court to testify.

When asked by the plaintiff why the defence witness did not show her the items collected from her locker, when she (the plaintiff) was on holidays, the chef told the court that the plaintiff was not at work.

The plaintiff further put it to her that it was not true that she found items in her locker.

Still testifying under cross-examination, the hotel chef told the tribunal that she had all the right to search lockers, as the manager.

At that juncture, the plaintiff put it to the defendant’s witness that she was not the manager of the hotel, but instead a chef.

“I am a manager, and the Human Resource Manager can confirmed that,” she told the tribunal, adding that she was also an executive chef of the hotel.

The plaintiff stated: “I did not have the power to fight the management, that was why I brought you to justice,” adding: “I put it to you that all what you told this court is not true;  it is not evidence-based, and that your allegations were all false”.

However, the defendant’s witness maintained that what she told the court was the truth, adding the privileges the plaintiff enjoyed were not accorded to anyone else at the company.

The chairman of the tribunal, Ngube, subsequently adjourned the case to 3rd October 2011 for hearing.

According to the particulars of the claim by the plaintiff, she was an employee of the defendant, and that she started work with the defendant since 15th June 2004.

She said she was wrongfully dismissed by the defendant on the 27th June 2011, without a dismissal letter from the defendant.

Mama Cham Deen added that she was not also paid for the month of June 2011. She said that the reason for her dismissal was that someone accused her of finding some eggs and sugar in her locker. 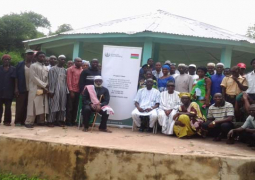