Continuing his testimony before acting-principal Magistrate Alagba of the Banjul Magistrates’ Court, Jobe told the court that the accused person signed in to his email account in the presence of Observer Managing Director, Pa Malick Faye, Momodou Lamin Sanneh, Amie Manka, himself and the IT expert.

When asked whether he had first-hand information that the accused person was supplying information to the US-based Freedom Newspaper, Jobe in response said  ‘Yes’,  adding, “When we read the said article, we all knew who was behind it, even though the article had no byline.”

He said he had first hand information through the IT expert that the accused person was the one sending correspondence to Freedom Newspaper.

Defence counsel put it to him that the whole issue was based on mere suspicion, but Jobe disagreed.

“What I can say was that the accused was the one responsible for such publications in the Freedom Newspaper,” he told the court.

When it was further put to him that it was as a result of the petition letter the accused person wrote, that the police and the NDEA mounted an investigation; that the Office of the President responded that the matter be investigated, Jobe said he was not aware of such, as deputy editor-in-chief.

He said what he was aware of was that the matter was investigated by the police and the NDEA, and statements were obtained from the senior staff of the company.

When defence counsel Neneh Cham put it to him whether the accused person went to Observer to meet the Managing Director, to discuss the matter and resolve it within the office level, Jobe said the accused person came to the office to beg, so that he could be reinstated in his position, but to no avail.

Defence counsel Cham then put it to him that the accused person never went to Observer to beg for anything.

However, Jobe told the court that the accused person once met him (the witness) so that he could talk to the Managing Director, Pa Malick Faye, to forget about the issue.

When asked by defence counsel Neneh Cham whether the accused person was once among the senior members of the company, Jobe said he did not know about that, because they “do not have” any senior management team.

“We only have an editorial department, of which I am the head,” he said.

The case was at that juncture adjourned till 18th August 2011. 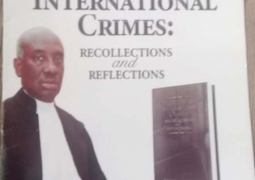