The executive secretary of the National Sports Council (NSC), Mamudou Max Jallow, is delighted with the decision of the Gambia Football Association (GFA) to recognise Brufut as a major nawettan centre.

Jallow, who is a native of Brufut and founding member of the Brufut Marathon Committee, made these remarks in an exclusive interview with Pointsports yesterday.

Recognizing Brufut as a major nawettan centre will help the players in the village to showcase their skills and talent, Jallow said, adding that it will also create an opportunity for them to expose themselves.

“Our recognition as a major nawettan centre by the normalization committee of the GFA will help players in Brufut to play for the GFA 1st and 2nd division teams,” Jallow noted.

Brufut is blessed with raw talents, he added, saying he was optimistic their recent recognition as a major nawettan centre by the country’s football body will really boost the level of football in the village.

He expressed confidence that Brufut will deliver to expectations in the Super Nawettan even though it’s their first appearance in it.

He also seized the opportunity to thank the GFA for recognizing Brufut as a major nawettan centre, adding: “This move will go a long way in promoting Gambian football.” 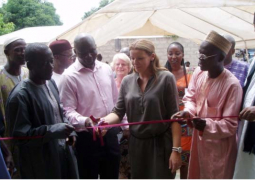