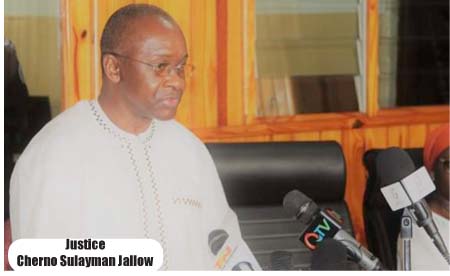 Justice Cherno Sulayman Jallow, the chairman of the CRC during a press conference on Friday at the CRC’s office in Kotu said the draft constitution comprises 20 Chapters (3 chapters less than what is contained in the current constitution); with a total of 315 clauses.

Since its establishment in 2017, the CRC commissioners and staff have embarked on public consultations within and outside the country with a view to sounding the opinions of Gambians as to what they wanted in the new constitution.

Each chapter of the draft constitution, he explained, addresses a different issue, although in some instances certain chapters have a correlation with provisions contained in other chapters.

“Appropriate sectional references and cross references are made where necessary in order to ensure clarity and/or avoid or prevent inconsistencies. These are necessary aspects of drafting,” Jallow said.

He added: “In essence, the draft constitution we present to the Gambian public today is the embodiment, as we have been able to discern from the opinions canvassed with the CRC, of the people of The Gambia.”

“We have crafted them in a manner that we consider best represents constitutionalism in our young democracy as we look forward into the future.”

The CRC boss stated that in the first chapter dealing with the republic and sovereignty of the people, specific provision is made to declare The Gambia as a multi-party democratic state that is founded on respect for the rule of law and the national values and principles of governance enshrined in the constitution.

He said: “In addition, it identifies the three organs of government (Executive, Legislature and Judiciary) to whom the sovereign power of the people is delegated and on whose behalf that power must be exercised for the welfare and prosperity of the people.”

Justice Jallow added that they also put into account the emphasis placed by the people on empowering local government authorities and the importance of devolution of government.

Chapter II, he went on, clarifies that a treaty The Gambia has entered into does not automatically become law unless it is transposed into domestic legislation.

“The courts are empowered to have due regard to international human rights treaties that The Gambia is a party to where that is considered necessary to aid the interpretation or application of a provision of this constitution with respect to any right or freedom.”

“It also places emphasis on good governance, separation of powers, sustainable environment and equitable distribution and use of resources, and equality before the law.”