In this week’s Health Matters column, we bring for you an interview with Mr Musa Jallow, deputy programme manager, National Leprosy and Tuberculosis Control Programme (NLTP) on the recent celebration of World TB Day.

In this interview, Mr. Jallow spoke extensively about Tuberculosis and the significance of World TB Day.

HM- The joined the rest of the world in celebrating World TB Day on Thursday 24th March 2012. Can you give a brief history of World TB Day and why it is celebrated globally?

Mr. Jallow - World TB Day, annually held on March 24th, marks the day in 1882 when Dr. Robert Koch stunned the scientific community by announcing that he had discovered the cause of tuberculosis, the TB bacillus.

At the time of Dr. Koch’s announcement in , , TB was raging through , causing the death of one out of every seven people. This great discovery paved the way towards diagnosing and curing TB.

In 1982, on the one-hundredth anniversary of Koch’s discovery, the International Union against Tuberculosis and Lung Diseases (IUATLD) commonly called the proposed that March 24th be proclaimed an official World TB Day. In 1996, the World Health Organisation (WHO) joined with the and other concerned organizations to promote World TB Day.

Today, the day is celebrated worldwide with the aim of raising public awareness about TB and the efforts being made to control and finally eliminate the disease.

Therefore, as part of the events marking World TB Day, it is important to create more awareness about the disease in the through the media.

HM – Now since the day is celebrated mainly to raise awareness, what is Tuberculosis?

Mr. Jallow- Tuberculosis is a bacterial disease caused by a microorganism called Mycobacterium tuberculosis. Today, more than a century (130 years to be specific) after Koch’s discovery, it is estimated that one-third of the global population is infected with the TB bacilli and over a million people die annually from the disease.

HM– What are the symptoms of TB?

Mr. Jallow - There are two forms of TB:

2. Extra-pulmonary TB (EPTB), i.e. TB outside of the lungs. The symptoms of EPTB vary, depending on the organ affected.

Pulmonary TB is the one that can be transmitted from one person to another. Its symptoms include:

However, for pulmonary TB, the most important symptom is persistent cough for 2 weeks or more. This is what underpins the definition of a TB suspect.

HM– People often talk about infection and disease, can you please elaborate on these two terms?

Mr. Jallow - Usually, people infected with TB harbor the bacteria without developing symptoms. This condition is called ‘latent TB infection’. In this state, the bacteria are inactive, kept in check by the body’s defense system. The person does not feel sick.

However, the disease may become active in the future which is principally due to weakening of the body’s immune system. Once they develop active TB, these individuals begin to manifest signs and symptoms of TB. People living with HIV (PLHIV) are particularly vulnerable to reactivation of latent TB infection to active TB disease.

This is because the PLHIV have weak immune system. On the other hand, TB is one of the leading causes of death among people living with HIV.

HM – What is the mode of TB transmission?

Mr. Jallow - TB is spread from one person to another by airborne transmission. The main source of infection is a person with pulmonary TB smear-positive. When patients with PTB cough or sneeze, they produce aerosol of infectious droplets containing TB bacilli. If people inhale these infectious particles, they become infected too. A smear-positive patient can infect at least 10-15 people per year.

HM – What are the factors that determine or increase the risk of transmission of TB among people include?

Mr. Jallow – The factors that determine or increase the risk of transmission of TB among people include:

The concentration of infecting droplets suspended in the air

Overcrowding, particularly in buildings and other places that are poorly ventilated. This is significant since TB transmission mostly occurs within the household of the patients with pulmonary TB.

HM– What are some of the factors that can promote progression from infection to disease?

Mr. Jallow- The factors that accelerate progression from infection to disease include the following:

HM - What can we do to minimise TB infection transmission in our community?

Mr. Jallow– Measures to prevent TB transmission include the following:

1. Reduction in the number of sources of infection in the community most effectively achieved through early case detection and prompt treatment of infectious cases. Persons coughing for 2 weeks or more are considered ‘TB suspects’ and should go to the nearest TB clinic for diagnosis. Once test results are positive for TB, these patients are promptly put on directly observed treatment (DOT) so that they will be rendered non-infectious within a shorter period. In this way, the chain of infection transmission is broken faster than it would have been if these infectious cases were not detected earlier and immediately treated.

2. Covering of the mouth and nose when coughing and sneezing.

3. Keeping windows open for movement of fresh air in our houses, places of worship, taxis, buses and in places where people are congregated such as in prisons, police and military barracks.

4. Avoiding spitting on the ground, particularly in public places.

5. Adhering to treatment by taking your TB medication regularly until you are cured or complete the treatment. Treatment adherence helps TB patients to be cured so that they will no more transmit the infection to others. It also prevents the TB bacilli from developing resistance to TB medications.

HM- What is your final message to the public?

Mr. Jallow - To conclude, the key message for the public is:

‘Have you been coughing for 2 weeks or more, sweating at night, losing weight and appetite’? If so, please visit the nearest TB clinic for sputum testing. The TB test and treatment are provided free of charge in the regardless of your nationality. TB is treatable and curable. There is no need to stigmatise and discriminate against people with TB. 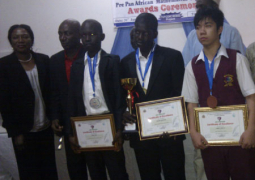