Nip the strike in the bud

We have heard and experienced the sit down strike being carried out by taxi drivers in the country, as there are hardly enough taxis in town these days.

While it is grossly threatening to the smooth movement of people and goods, the strike action is also averse to the national economy and growth.

The over 100 taxi drivers in the strike are doing so in protest of “the numerous restrictions” they face on the highway in the hands of the traffic police”.

They said their strike action was prompted by a number of factors and traffic conditions put in their way by the traffic police.

These factors, they say, range from the bad conditions of the roads, to lack of a strong drivers union to protect their interest, police “taking bribe” from drivers, no stopping areas to pick up and drop off passengers, no parking spaces among other factors.

This situation is a cause for concern, which needs the urgent attention of the powers that be, especially the minister responsible for transport, the police authorities, and to some extent, the National Roads Authority, to be able to find some concrete and better solution to the lingering problem between drivers and police in the country.

We should also not forget that while there are sides to the dispute between the drivers and the police, there is also another side to the issue: that is, the passengers and the drivers who also try their best to cheat passengers by cutting short the usual distances and routes to make more money of the people.

Nowadays, going to Bakau and Sabena, for instance, is a big problem because drivers tend to cut the journey into three to go to Bakau and two to go to Sabena.

Some drivers will tend to stop at Africell in the morning or the Traffic Lights, which is in contravention of their normal route and then would later continue to Sabena or Bakau causing the passengers to pay double or triple fare before reaching their destinations. This is somehow extortion by trick.

Another brewing habit by drivers is that they are fighting tooth and nail through surreptitious means of telling passengers that they “are lack of change or the two dalasi coins they should give to passengers who give them bigger money or notes for the fare of eight dalasis.

In other words drivers are craving to get the fare up to D10 for the distance for 8 dalasi fare.

This practice should be nipped in the bud by the state authorities; otherwise fares will be unceremoniously increased in the country, thereby causing more hardship for the people and making it difficult for the government to cushion the economic condition in the country.

It is therefore advisable that the authorities take a proactive action in trying to tackle these myriad of problems in our traffic involving the drivers, the police and the passengers.

The relevant authorities should identify garages in certain destinations for commercial vehicles, to avoid drivers charging more than necessary just for one short distance.

The National Roads Authority should also try to help with the improvement of some key roads in town as well as identify stopping and parking places for commercial vehicles.

“To jaw-jaw is always better than to war-war.” 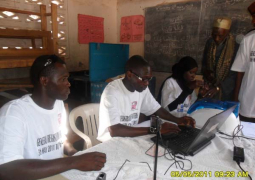