I felt lonely at home and a walk was the perfect idea. The moon was clear and the wind was cool as it hit my face. The night held some promises and I could sense them through the wind. This is good, I told myself.

My clients need this cool night to cool off and take things off their mind. That would reduce the work load off me. I made a mental note to say that in my counseling program or write in the paper.

I drew in the deepest breathe I could and the cool air rushed in through my nostrils. I savored the moment. Twenty minutes later, I realized then that I had wandered off and was well into a deserted area full of trees. I must have been buried in my thoughts. Since I was there, I decided to walk on and discover the place. Five minutes later, my tiny little voice started telling me to go back, but the curiosity in me urged me on. It was then I heard shrieks, then the shrieks became whimpers and the whimpers turned into vague screams. A chill ran down my spine and sweat broke from my forehead. I wanted to run back home, but something pulled me towards the sound and I couldn't figure out what it was.

I went further, avoiding the overgrown weeds and branches on my way.

Then I saw two men with masks on their faces except for their eyes, but that wasn't much help since it totally hid their faces.

I hid behind a tree and watched their operation. They were trying to get some information out of a woman who was unwilling to cooperate. On her back was tied a baby. One of the men kicked her and she gave a loud cry. She was forced to remove the baby from her back. Another threatened to cut the nose off her face. I only managed to make out some of their conversation. It seemed that the woman cheated them out of their money and refused them their share after they had successfully robbed a rich man.

"After this, you would know better than to cheat us. You are going to lose your baby and that is punishment enough!"

"And if you ever try to report this to the police then you have me to contend with," threatened the other in a deep gruffly voice.

"Why bother man, she never even liked or cared for the baby, it was me who did and I am not sure if it is mine or not."

How cruel! I nearly said my thought out loud before I stepped on a twig and it made a loud crack. They all turned to attention, listening for another sound before attacking. It was what the French called en garde. My heart did a fast race, one Ansu Sowe can't beat. It started racing faster than it ever did. I threw my right hand over my nose and mouth in case I was breathing too hard.

It seemed like forever before they went back to business. I stood there frozen as they led the woman away from her baby and it cried for its mother's warm embrace. My heart went out to the poor thing.

Thirty minutes later after I was sure they were out of sight and not any where around there, I slowly crept up to the baby and picked it up.

I brought it close to my breasts and gave it a noisy kiss on the forehead.

It must have been its sixth month.

It moved it hands, looked at me with lost innocent baby eyes and I looked at it with so much love it made me want to cry.

I heard footsteps coming and I hid behind a tree. It was them; they must have come again to see if the baby was there.

"Good riddance," said the smaller of the two.

"I told you, someone must have been around here," said the one with the gruff voice.

"Let's get out of here this is what she gets for cheating us out of our money."

Minutes later, I was heaving and panting as I ran towards home with the speed of fear. Baby in my arms, I stumbled on my way many a times. My speed was reduced by the overgrown branches which kept pulling at my sweat shirt and tearing it off in the process. I ran home with frightening freedom.

It was when I was in the comfort of my house that I realized that I had bruises on me.

It was really a crazy night and one which was worth it, because I found myself a baby. 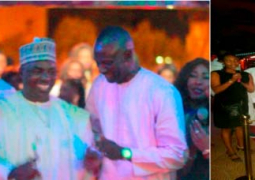