The case involving senior members of the National Intelligence Agency (NIA) and the National Drug Enforcement Agency (NDEA) was yesterday heard in Chambers at the Banjul Magistrates’ Court.

All are being tried on charges of unlawfully wounding with intent to do grievous harm, and for conspiracy.

When the case was called in an open court and all the accused persons were in the dock, the trial magistrate rose and went into his chambers.

He later communicated with both the Director of Special Litigation D.O Kulo, and the defence counsel lawyers Abdoulie Sissoho and Lumina Frage

According to Kulo, the witness is a security personnel and the court decided for him to give evidence in chambers, for security reasons.

It was alleged that the accused persons in May 2009, at NIA head office in with intent to do some grievous harm to Lamin Kabou, wounded Kabou by beating him with first blows, an electric cable and metals.

It was further alleged that, in May 2009 at NIA head office , they conspired among themselves to cause injury to the person of Lamin Kabou and Lamin Sima. 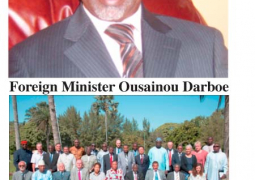