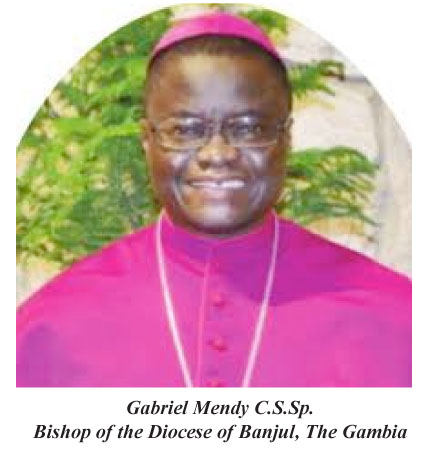 THEME: RESTORING THE CULTURE OF PEACE BASED ON MUTUAL TRUST NOT DECEPTION AND MISINFORMATION

On this day we observe the 53rd anniversary of World Day of Peace, my message to you my dear brothers and sisters in Christ, our fellow Muslim neighbors, relatives, and friends, believers of other faiths, and all Gambians at home and abroad is for us to restore the culture of peace in The Gambia that is based on mutual trust and not deception and misinformation. As Gambians, the concept of a culture of peace may not be too strange and new for most of us. For a culture of peace has until recently prevailed in the cordial and respectful relations of Gambians regardless of their religious, tribal, political, and social background. The Gambia was renowned in the sub-region and around the world as a peaceful nation where the Muslim majority and Christian minority coexist in harmony; where there were no tribal, political, and religious conflicts because there was a prevailing culture of peace and respect for all. Another reason why the concept of a culture of peace may not be foreign to many Gambians is because the United Nations General Assembly declared the year 2000 as the International Year for the Culture of Peace. The United Nations also declared 2001 to 2010 as the decade for the Culture of Peace and Non-Violence for the Children of the World. Most of us, therefore, have some sense and understanding of the culture of peace.

Nevertheless, for the sake of clarity and for the benefit of those who are unfamiliar with the idea of a culture of peace, I would briefly indicate its meaning in our context. A culture is generally a way and manner of life that is informed by the goods, practices, and values of one’s ethnic, historical, and sociological origins. Vatican II would, therefore, define culture in Gaudium et Spes nos. 53 as “all those things which go to refining, developing, and [educating] humanity’s diverse mental and physical endowments.” A culture of peace is, therefore, a heritage, lifestyle, mindset, and outlook in life that generates and creates an atmosphere of cordial and mutual relationship among different peoples and neighbors living and working in communities and nations. This was what existed in The Gambia in past years. Unfortunately in recent times, the atmosphere of cordial and mutual relationship among our diverse peoples and religions is now affected as a result of deception, misinformation, and mistrust. It is, therefore, timely and appropriate as we begin the New Year of 2020 for us to restore the culture of peace that once prevailed in our land. After twenty years since the United Nations’ declaration of the International Year for the Culture of Peace and after another decade since the end of the first decade of the Culture of Peace, we should seriously examine ourselves and see how we Gambians have maintained and promoted our own historical culture of peace in our dear Motherland.

Since the year 2000, many organizations and Governments projected 2020 as the year they will fulfill their humanitarian, economic, political, and developmental visions and goals. We are now in 2020 so the burden is on them to determine whether they succeeded in attaining their vision and goals. But as noble and desirous these goals are, the restoration of our culture of peace that made us very prominent among the community of nations should be our common vision and priority. We surely cannot compare these estimated goals and visions with our national peace or even achieve them at the expense of our invaluable peace and unity as a country. For in the words of Pope Francis in his 2020 message for World Day of Peace, “peace is a great and precious value, the object of our hope and the aspirations of the entire human family.” We must jealously safeguard this gift of peace because it forms the core pillar and foundation of our society on which our very existence, survival, and progress depends. For the sake of peace, our own good, and the stability of our nation, we should withstand and reject those who seek to deceive, misinform, and mislead us from the truth concerning our ethnic, religious, and political affiliations and identity as Gambians. They simply want to create mistrust and misunderstanding among us instead of cultivating a culture of peace and unity based on mutual trust and respect for one another.

From the proceedings and evidence that the Truth, Reconciliation, and Reparation Commission (TRRC) so far obtained and the grave concerns expressed about the omissions and provisions in the draft Constitution of the Constitutional Review Commission (CRC), it is very clear that the culture of peace, unity, and mutual coexistence that existed in The Gambia before is not only at stake but increasingly at risk. We should, therefore, take concrete and practical steps in this New Year to ensure that this undesirable situation we never experienced before is properly and amicably addressed to avoid the unintended consequences of disunity, disorder, and insecurity. Pope Francis recommends some steps or measures for us in his message on World Day of Peace. He said, “how, then, do we undertake a journey of peace and mutual respect? How do we break the unhealthy mentality of threats and fear? How do we break the current dynamic of distrust? We need to pursue a genuine fraternity based on our common origin from God and exercised in dialogue and mutual trust. [For], the desire for peace lies deep within the human heart, and we should not resign ourselves to seeking anything less than this.” Our efforts to restore the culture of peace and mutual coexistence should be purely based on mutual trust and respect and not deceit and misinformation.

The reason we are alive and present at the beginning of another New Year is because of God’s goodness, love, mercy, and protection on us throughout last year. We should, therefore, thank God for his care, guidance, and blessings and commend ourselves, our efforts, hopes, and future into his hands. For there is nothing praiseworthy we can do without God’s intervention, assistance, and blessings because our success and wellbeing depends on God. As the psalmist rightly said in Ps. 127:1-2, unless the Lord builds the house, its builders labor in vain. Unless the Lord watches over the city, in vain does the watchman keep vigil. He said, in vain is your earlier rising and going later to rest you who toil for the bread you eat when God pours gifts on his beloved while they slumber.” These words should motivate and guide us throughout this New Year as we pray and endeavor to restore the culture of peace in our country based on mutual trust and not on deception and misinformation. As the Catholic Bishop of the Diocese of Banjul, I pray that God will grant all Gambians at home and abroad a peaceful, successful, healthy, and progressive New Year. May God continue to preserve our country and all true believers in The Gambia from the forces and agents of evil who are against peace, unity, cooperation, mutual respect, and coexistence. May God bless and protect all of you throughout this year of 2020.

Catholic Bishop of the Diocese of Banjul, The Gambia.