In unveiling the new project, the deputy governor of West Coast Region, Madam Fatou Sanyang, underscored the significance of water. “Without water, life would be very difficult,” she says. Water is a universal solvent and a necessity for life and the provision of safe clean water is a basic need.

Madam Sanyang commended the Agency for Development of Women and Children (ADWAC), Youth Action for Food Self-Sufficiency and Education (YAFSSE) for supporting the project and the government for creating an environment conducive for the realisation of such a developmental project.

For her part, Ms Bridget Tabou Correa, ADWAC head of programmes, said the agency is a non-sectarian registered NGO established in 1996.

“We are operating in the North Bank Region with the objective of improving access to safe and clean water, quality education and healthcare for women and children in the region,” she said.

She noted that the agency is committed to improving the quality of livelihood of poor and marginalised women and children.

According to her, ADWAC received funding from a Belgian NGO called Terre Nouvelle to implement activities on food security and water projects in NBR and to complete Kunkujang Jattaya water project.

She noted that the Kunkujang Jattaya Water project was first given to YAFSSE since 2008 but later inherited by ADAWAC to complete the contract.

Ousman Ceesay, coordinator of the project, revealed that Kunkujang Jattaya has 106 households. “With this new project 15 taps were installed in strategic points across the village,” he said.

A water committee was established and trained on how to manage and maintain the smooth running of the project, Mr Ceesay added.

The Director of YAFSSE, Buba Senghore, said his NGO was established in 1985 to work with Gambian youths and women on food security.

The organisation is out to promote youths and women leadership participation, through providing clear water supply system, and improving crop productivity, poultry or animal husbandry.

Seedy Barrow of Regional Solar, who was contracted by ADWAC to install the solar system, said the tank has a capacity of 50m3 that can produce 60 to 65,000 litres per day.

The solar energy water project has a warranty of about 25 years, he said, adding that the spear parts of the electronic components are also locally available. 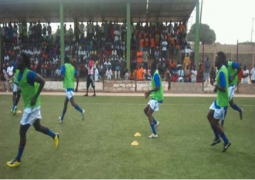