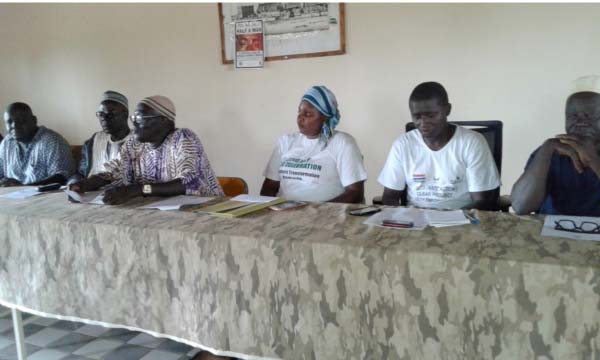 Officials of Nema/Chosso Project, under the Department of Agriculture, are intensifying efforts to raise public awareness on climate change to enhance food production.

Speaking on the occasion, Aji Oulaye Njie-Sowe, climate change adaptation specialist of Nema/Chosso project, said climate change is real and it remains a development challenge which has enormous economic and social consequences.

She said The Gambia is vulnerable to the effects of climate change as the majority of the population depend on natural resources for livelihood.

“Climate change engenders the livelihood of small holder farmers,” Mrs Njie-Sowe said.  She added that there is a need for concerted efforts in adopting positive change through integrated approach to enhance sustainable development.

He urged farmers to be vigilant and proactive in adopting climate change related issues to enhance food production and sustainable livelihood development.

Deputy Governor Saidy called on farmers to plant trees on farm boundaries and initiate community forest to mitigate the effects of climate change.

Alasan CMB Bah, officer-in-charge of North Bank Regional Agricultural Directorate, also hailed the farmers for their support to food production and diversification in the drive to national food security.

He advised farmers to be steadfast to disseminate information on climate change and resilience building.

He said this would reduce vulnerability from climate-induced hazards and increased adaptive capacity in a changing environment.

Mr Jawla affirmed that the intervention would increase community and household climate change adaptation as well as water harvesting and forest restitution interventions.

“Climate change will affect the people who rely on water for everyday use; therefore, combating the effects of climate change calls for concerted efforts of all stakeholders,” he said.