We would once again like to express our utmost dissatisfaction regarding the condition of the ferries currently plying between and Barra.

While we welcome the move by the authorities to build new ramps at both the and Barra ferry terminals, for the newly-purchased ferries which were commissioned since last year, we insist that the condition of the old ferries be given top priority.

We have over the years stated on these pages that an efficient transportation network is indispensable to the realisation of the government’s Vision 2020 objectives, but only if urgent actions are taken to put right both major and minor loopholes in the operations of the ferry services in this country, within a reasonably short time.

Recent happenings in our ferries, especially while they are moving between and Barra, have pointed out again the need to make our ferry services much safer, in the interest of humanity.

Of recent, there have been a lot of complaints by people, most of whom use the ferries on a daily basis, about the condition and the time it takes the ferries plying the crossing to cross.

Crossing between these two destinations these days, one would realize the slow pace with which the ferries move; which in most cases take passengers crossing a number of hours to reach either Banjul or Barra.

Though the ferries bring in a lot of revenue, on a daily basis, the GPA should and must be seen to take immediate steps to put aside any ferry that is no longer safe for use by the travelling public.

Indeed, many are sceptical about the safety of the ferries, and complaints are frequently heard about the present condition of the ferries in causing “delay at both terminals, particularly for vehicles”.

However, this is not the time for belabouring the point about who is to blame for this current predicament; rather it is time for action.

The management of the GPA should put every safety measure in place in our ferry services, to give the passengers crossing a reasonable degree of assurance that the ferries they board are perfectly safe. This is the feeling all around, at the moment.

Availability of a proper transportation network, especially ferry crossing, has now become a major concern in all corners of our society.

The GPA should, and must be seen to take immediate steps to put aside any ferry that is no longer safe for use by the travelling public, and nothing should be taken for granted.

The overriding consideration should be the safety of the people!

As an immediate measure, to giving the travelling public more confidence in the services at the ferry terminals, ferries that are no longer in a good condition should be removed from operation without further delay.

Indeed, any ferry that needs maintenance should be given the immediate attention it deserves.

Also, extra inspection should be conducted on ferries routinely, shortly before their departure.

Captains should be extra vigilant about the state of their ferries; they should not at any point in time ignore any abnormality in their ferries. 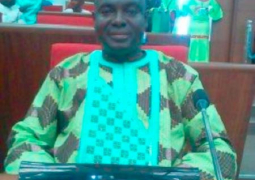