There is no doubt that peace and unity are indispensable to progress. Where chaos and anarchy reign, real progress can never take place.

It is this culture of peace that we want to see nurtured with vigilance, so that The Gambia could be turned into the Silicon Valley of the African continent.

Our point of focus is the statement by the Minister of Regional Government and Lands, who called on the people of Banjul yesterday to be united and see themselves as Banjulians.

In his words: ‘The elections are over and you are all Banjulians; you have a common objective and common destiny. You have to be united and see Banjul and nowhere else. This is the desire of President Jammeh, who is also a resident of Banjul and, therefore, interested in seeing people of Banjul in unity.’

As we have always emphasized in these pages, having different ideologies should never make us enemies.

One requirement of true and lasting peace though is for political leaders to commit themselves to social justice, as well as economic justice.

When the opposition parties are consulted on matters of national importance, they will feel a sense of belonging that would impact positively on our politics and on our national development endeavours.

But, then again, being in opposition is not a licence to run down a ruling party.

In a democracy, an opposition political party is just a flip side of the governing one. Each has a manifesto, spelling out its beliefs and intentions for a country.

It is on the basis of this manifesto that the electorate decide which party to entrust with the management of the affairs of state. When the prevailing needs and aspirations of the people are in agreement with the manifesto of a political party, that party carries the day.

But changing circumstances could make the same manifesto irrelevant to the electorate, who would then again vote out that same party. Seen in this light, it is the political party that is most responsive to the needs and aspirations of the people, at any given point in time that is given the mandate to govern.

That is how democracy works!

After all, politics is a contest between rival forces for the same ends - the control of power. But how that power is used, when it is obtained, is a different matter altogether.

Preferably, it should be exercised in the best interest of the people in whom real sovereignty lies.

We support neither the governing party nor the opposition.

All we want is a government that promotes the common good, and can move The Gambia forward on the path of continued peace, progress and prosperity within the framework of a just and open society.

“Our objective in the establishment of the state is the greatest happiness of the whole, and not that of any one class”.

Cut Demand and the Trade Will Fade 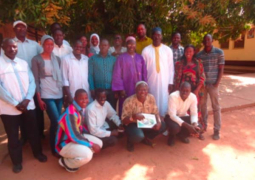