The police announced this week that traffic police will, starting this Wednesday, impound vehicles which have not renewed their licence for 2014. Drivers must also renew their driving license or risk prosecution.

The police PRO was quoted as stating that renewing the yearly licence is in line with the motor traffic Act and related regulations.

It must be pointed out that the police have in the past issued several edicts on the use of seat belts in vehicles; using helmets for motor bike riders and their passengers; not using a mobile phone when driving; and so on. Now, they have made this latest announcement.

Of course, we understand why they they have to do so - the government must receive this specific revenue item in order to pay for budgeted public expenditure, such as the salaries of the police.

Yet as road users on a daily basis, to and from work, we all see and know what happens on our roads.

Thus, we hope the police will show the same enthusiasm, being displayed in collecting much-needed government revenue, in carrying out their other duties, specifically enforcing the myriad traffic regulations.

Indeed, it is time the police follow words with action, by enforcing their own edicts, which we believed were designed to ensure human security.

Traffic regulations have been made known in numerous public notices; yet all these are flouted openly, may be now more than ever before, as you will see when you observe what is happening in the traffic.

If the traffic police want to preserve their credibility and image as a force that must be taken seriously, then they must be seen to be doing their job well.

Just see how motorists ignore “no parking” road signs, or the “one way/no entry” street signs.

See what happens at Westfield Junction next to the Gamtel office, and at the “Cooperative” intersection, where taxis (cars and vans) park right on the main highway – always creating utter chaos there, especially during the rush hour.

Drivers of private vehicles and taxi drivers all the time flout the prohibition against using mobile phones on the wheel, as any pedestrian or passenger riding in a taxi would confirm.

The traffic police on duty must be alert and watch out for such dangerous behaviour, and many more offences.

What about driving without proper lights; with one headlight, without working signal lights, with one back light or non-functioning parking lights, or with the lights switched off as they do at night on the roads with street lights, or with no rear view or side view mirrors? The list can go on!

People are frequently heard saying the traffic police have a very cosy relationship with vehicle drivers. The chaotic scenes witnessed daily at the “Cooperative” intersection, despite the many traffic police stationed there, would bear this out.

There was this instance, when a senior police officer boarded this taxi, on Kairaba Avenue, and took the front seat next to the driver. He did not bother to wear the seat belt throughout the long drive, all the way to the Kairaba police station, where he came off. The driver did not tell him to use the seat belt, either.

Unbeknown to them, a senior journalist was seated at the back, and took it all in. Of course, the journalist was flabbergasted by such open disregard for rules we all must obey!

Police and army vehicles are regularly on the road without proper lights, or some other infractions of Gambian traffic regulations.

You often see vehicles parked dangerously, and in the event of a break-down the vehicle is parked on the road without the mandatory reflector to warn incoming traffic.

We see bicycle riders coming the other way or on the wrong side of the road, which is very common on the Serrekunda to Tabokoto stretch of the highway; we see donkey carts / horse carts using the highway, and holding up/blocking traffic, when they police have publicly announced that they must use the back streets.

We see drivers parked on the highway during the rush hour (it is understandable when a truck or vehicle is unloading something; but other cars, such as private vehicles should be told to park in a corner street, then walk to the place (whether it’s the Tallingding market, Latrikunda Sabiji market etc., and attend to their business, come back take their car, and move on) – but they must not be allowed to park the vehicle on the road, and disappear. The list can go on.

It is also our opinion that police on the beat should be intervening, when drivers or cyclists are seen flouting the regulations. Cyclists, for instance, are always riding on the wrong side of the road, and endangering the other road users.

The Westfield junction is notorious for the use of the sidewalk by the shoe sellers; café touba vendors and afra meat sellers, even though you have traffic police and KMC police are milling all over the place.

Another matter worth highlighting is the speeding and reckless driving in inhabited areas bordering the highway.

The worst places are between Serrekunda and Tabokoto, and in Lamin village where you see drivers speeding dangerously, oblivious of the fact that you have many school children here.

It is not enough to have the speed limit sign located at Abuko near the abattoir; there should be speed limit signs in all these places, and they must be enforced by the traffic police on duty there.

What about the road from Jimpex to the new Serrekunda Hospital in the Kanifing Estate area. Despite you have the new Kanifing police station right on the road, drivers are always speeding unnecessarily on this road - leading to a hospital – and used by the sick coming to hospital, their escorts or visitiors to patients admitted at the hospital, by ambulances bringing emergency cases referred to the hospital, not to mention the people who live in this built area.

Indeed, the traffic police must do better in carrying out their duty to the society.

We hope we have adequately made this point!

You can spend the money on new housing for poor people and the homeless, or you can spend it on a football stadium or a golf course.
Jello Biafra 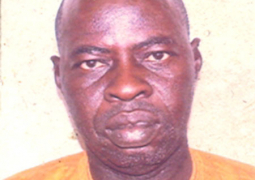