The crackdown on illicit drugs in the country by officers of the National Drug Enforcement Agency is showing no sign of abating, as anti-narcotic officers recently arrested 17 people suspected of dealing in the trade.

The 15 suspects, according to ASP Abdoulie Ceesay, were arrested with fake gold dust and eleven parcels of suspected cocaine following a tip-off.

“Anti-narcotic officers got a tip-off about people around the Brusubi area dealing in suspected cocaine and fake gold dust,” he said. “Upon receiving the information, we mounted an operation and fifteen suspects were arrested in a house in Brusubi on 3rdJanuary 2011.”

ASP Ceesay added that a search in the house led to the discovery of eleven suspected parcels of cocaine.

He also told journalists at a briefing held at the NDEA Kanifing office that among the fifteen people arrested, there were eight Gambians, two Senegalese, three nationals of Guinea Conakry, one of Guinea Bissau and one Sierra Leonean.

“At the moment, the matter is under investigation and the suspects are helping in the investigations,” he added.

The two Senegalese are Sheikh Joof and Malick Jallow, while those from Guinean Conakry are Abdoulie Barry, Cherno Muhammed Baldeh and Alasan Jallow. Omar Camara came from Guinea Bissau and Abubacarr Bangura from .

In another development, two people, Modou Lamin Colley and Fanding Saidykhan, were on the same day arrested separately in Giboro-Kuta with 50 and 7 bundles of cannabis respectively by officials of the NDEA.

These arrests also followed a tip-off, ASP Ceesay told journalists, adding that the two have already been charged. 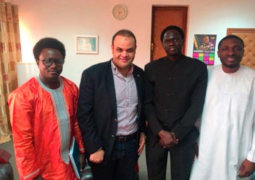