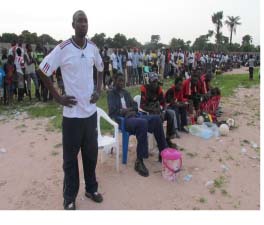 The annual summer football festival better known as Nawetan continues to gather pace across all major nawetan zones in the country.

In Gunjur, Late Dembo, Gamcel, Solifo Investment and World Eleven all sailed to the semi-finals in the 2014-2015 Solid Real Estate-sponsored Gunjur league, after winning their quarter final ties played at the Gunjur Nyamina football field at the weekend.

Late Dembo smashed the reigning league champion Steve Biko 2-0 in the quarter finals game to advance to the semi-finals.

Ousainou Janneh alias Daniel Alves and Muhammed Janneh were on target for the Santos-based outfit.

Gamcel sailed to the semi-finals following their 5-4 penalty shoot-out win over Commit in the quarter-finals, after a goalless draw in regulation time.

Solifo Investment progressed to the semi finals after defeating Sunderland 3-2, with goals from Ousman Sawaneh alias Rubin Van Persie and a brace from Fabakary Touray aka Maxi.

World Eleven sealed a place in the semi-finals following their 6-5 penalty shoot-out win over Pen Pushers Standard in the quarter-finals, after a 1-all draw in regulation time.

World Eleven opened the scores through Gunjur United’s influential winger, Ousman Bojang aka Mesut Ozil in the 76th minute of the game, from a stunning strike to give the Santos-based outfit the lead.

This pushed the game into a post-match penalty shoot-out which ended 6-5 in favour of World Eleven.

World Eleven FC will rub shoulders with Gamcel in the semi-finals, while Late Dembo will clash with Solifo Investment in other semi-final.

In Bakau, Oslo-Bantangkoto were held to a goalless draw by Six and One in the 2014-2015 Bakau nawettan match played at the Bakau mini stadium on Monday.

The draw has earned Oslo-Bantangkoto and Six and One one point each in one game, and they will be aiming to win their group fixtures to boost their hopes of clinching the trophy.

Birmingham was also held to a goalless draw by Black Pool in a mouth-watering clash played on Tuesday.

Birmingham and Black Pool both bagged a point in one outing to keep their title ambitions alive.