Dr Mustapha Ceesay, deputy director of the National Agriculture Research Institute (NARI), was yesterday recalled at the fertilizer commission to shed light on some of issues in connection with the Indonesian fertilizer.

Dr Ceesay told the commission that when he received the samples of the fertilizer he called Modou Ceesay, the supplier, to clarify the issue of the 15-15 type of fertilizer.

He said he did not disclose his identity to Modou Ceesay, when he was speaking to Modou on the phone from NARI.

However, Modou Ceesay, was asked by the members of the commission, and denied speaking to the deputy director of NARI on the phone.

Also testifying was one Alieu Tijan Savage, a store officer at the Ministry of Agriculture, who told the commission that he resides at Bakau, and had worked as a store officer for 20 years.

Savage told the commission that they had been keeping fertilizer in their store since 2009, and that he knew Modou Ceesay, who was the supplier and supplied them with three different types of fertilizer.

He further said that when the samples were been taken, he called one Mr Secka, but did not complain to his boss, Awa Touray, stating that he later realize that there were different fertilizer types.

“I was not authorized to release even a single bag of fertilizer, and all the fertilizer I received are in my store,” he continued, adding that he was opportune to see the contents of the different bags, but they looked alike.

The commission then ordered the witness to separate the fifty-seven thousand eight hundred and twenty bags and pack them in order. 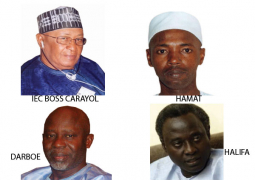