The Gambia Federation of Disable (GFD), in collaboration with the Department of Social Welfare and Voluntary Services Overseas (VSO), on Tuesday convened a two-day disability awareness workshop for National Assembly Members.

Held at the Laico Atlantic Hotel in , the workshop among others aims to raise awareness and increase knowledge on disability issues in The Gambia that will help persons with disabilities to actively participate in national development process.

In her opening statement, Mrs. Haddijatou Lamin Njie, VSO Country Director in The Gambia described the training of National Assembly Members on disability awareness as timely, noting that it seeks to address key concerns of all societies in the sub-Saharan .

"According to the WHO, 10% of all populations in these societies are affected by one form of disability or another and these segments of our population require much-needed support to participate in poverty reduction interventions,” she said.  She stated that people with disabilities' contribution to poverty reduction is highly dependant on the availability of health services, access to education and employment opportunities.

"Going by the National Population and Housing Census of April 2003, the disability prevalence rate increased from 1.6% in 1998 to 2.8% within a period of three years," she added. During the 2003 Census, she added, it was confirmed that the visually impaired had the highest prevalence rate followed by physical and hearing impaired in the country.

According to Mrs. Njie, for the past years, the Social Welfare Department, Ministry of Basic and Secondary Education, Sight Savers and VSO the have implemented a number of programme, to address issues such as rehabilitation, special schools needs, and mainstreaming disability in education. She said major hospitals like the RVTH, National Rehabilitation Centre of the Department of Social Welfare and Bansang Hospitals need to have the required capacity to detect disability at its early stage and support its management.

Mrs. Njie emphasised the need for the special schools needs to have the required resources, to ensure that every disable child receives quality education and level of public awareness on issues affecting people with disabilities. This, she added, will curtail negative attitudes and enhance participation of people living with disabilities in Gambian society. She said as lawmakers in the country, this training would further enhance the understanding of National Assembly Members on issues affecting disable people and support them in creating conducive framework for people living with disabilities in The Gambia.

For his part, Mr. Muhammed Kora, the President of the Gambia Federation of Disable (GFD), said presence at the two-day workshop was very important, as he put it, they () are representing the people of this country on matters pertaining to the development of The Gambia.

He said parliamentarians were not at the workshop for them to be told what to do, but they were there to get information relating to the situation of people with disabilities in The Gambia. 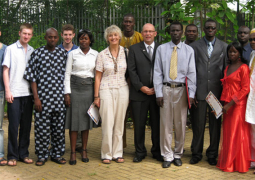