The members of the National Assembly recently adopted the following reports: the report on the 55th Commonwealth Parliamentary Association (CPA) conference held in , , the Pan-African Parliament (PAP) Speakers' conference held in Midrand, and the report on the National Assembly Select Committee on Agriculture and Rural Development nationwide tour of Community Driven Development Project CDDP sites.

According to him, the association comprises branches formed in the legislature in the Commonwealth countries, which he noted, subscribes to parliamentary democracy.

He said the CPA annual conference is a forum where global political issues and developments in the parliamentary system are analysed and debated by leading parliamentarians and legislatures throughout the Commonwealth.

According to the Hon Manka, the conference on the theme "The Commonwealth and the CPA, Meeting the Future Challenges," was officially opened by the President of the , Jakaya Mrisho Kikwete.

"President Kikwete, in his opening remarks, warned that negative climate change is putting the earth at risk, and called for developed nations to take responsibility of addressing the situation since they are big polluters," Hon. Manka said.

He said the conference is held at a time when the world is confronted with major global challenges, namely climate change, global food and financial crisis and poverty.

Member on the same day adopted the report on the Pan African Parliamentary Speakers’ Conference, presented by Hon Sedia Jatta, the member for Wuli West.
In his presentation, Hon. Jatta stated that the conference was organised to consider the transformation of the PAP into legislative body, the domestication of African Union’s decision and the advocacy of African parliamentary knowledge network.

According to Hon Jatta, the aim of the conference was to create an atmosphere of effective sharing and utilisation of information to complement the strategic objectives of the African Union among members’ parliaments of PAP. 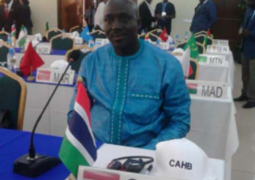