Presenting the report to deputies, Hon. Netty Baldeh, head of delegation to the conference, said the meeting discussed a motion for a resolution on the challenges of national reconciliation in post-conflict and post crisis countries.

He added that one of the agenda items of the committee is private sector development strategy, including innovation for sustainable development, as well as the financing of investment and trade, including infrastructure, in ACP countries by the EU blending mechanism.

Another item on the agenda was the Economic Partnership Agreements (EPAs) and role states play in its negotiation and implementation.

According to Hon. Netty Baldeh, the conference was very informative, hence advised National Assembly members to find time to better understand the many issues at play in the international arena, particularly on the ACP-EU Relations, Post 2015, the Cotonou Agreement and 1st EDF.

“What is the way forward on all these issues? What is our role as representatives of the people on these issues?” he asked.

“How do we support, complement and add value to what our governments are doing? We must together endeavour to positively impact on policy for our collective future, and collective co-prosperity,” he said. 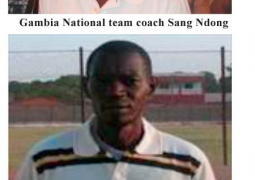