Speaking at the presentation ceremony, Babacarr Cham, the Social Affairs Secretary of the foundation said the aim of establishing the foundation is to help in the spiritual, social and economic empowerment of mankind, as envisioned by Mawlana Sheikh Ibrahim Niass. Cham noted that the foundation is conceived to enable members to come together and harness the intellectual capital among them with a view to initiate and establish sustainable projects and help in the building of institutions and governance structures.

He stated that the QCell internet data card will help the facility ease the communication gaps of the clinic.

Dr. Ibrahim Malick Samba, the honorary life president of the foundation said the anti- malarial and anti-biotic drugs would go a long way towards helping the clinic in its operations. According to him, their support to the clinic and Dara () is meant to supplement the efforts of the clinic and government, adding that their foundation is dedicated towards supporting human beings.

Sheikh Tijan Nyang,the Islamic teacher-in-charge of the Dara thanked the foundation for the wonderful donation, noting that the reason for introducing boarding at the Dara is to impact knowledge.

Nyang stated that the Dara was initially located at Bijilo, but with the support of one white lady Mariama Sankareh, who later converted to Islam, both the Dara and the clinic are currently housed at her residence in Kunkujang Keitaya.

For her part, Fatou Gaye, the nurse-in-charge of the clinic said the Dara came through the support of Mariama Sankareh. She pointed out that the clinic was established based on Islam principles. She stated that since they moved to Kunkujang, they were able to conduct 40 successful deliveries and received about 750 patients.

She said the aim of the clinic is to help the community and Dara, noting that their services are rendered to people free of charge. Mrs Gaye-Nyang finally assured the donors that the donated items would be put to good use.

Other speakers at the ceremony included Mr. Abdoulie Cham, the President of the foundation and Mariama Sankareh. 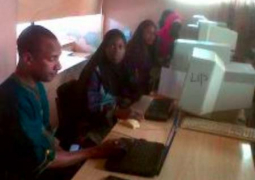