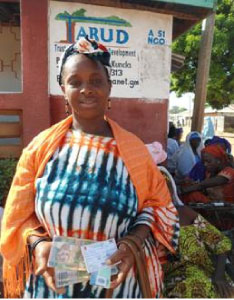 As part of their effort to lessen the effects of the 2011 food crisis on the most vulnerable people in Kombo South district, the National Cooperative Credit Unions of The Gambia (NACCUG) at weekend distributed an amount of D882, 000 to 441 beneficiaries from 15 communities within the district.

According to the organizers, the program was coordinated and implemented by TARUD, the Trust Agency for Rural Development, in partnership with Concern Universal supported by Oxfam America.

Sandang Bojang, programme director TARUD, revealed that the exercise was a follow up program to the earlier distribution of hygiene materials to the most affected families within the district.

According to him, materials distributed to communities worth D300, 000 and cash for food distributed in the first slot was D882, 000 to the 441 selected family heads from 15 villages in Kombo South, and each affected family was expected to receive D4000 (D2000 per slot) and the second slot would follow soon.

He noted that there is an ongoing radio sensitization campaigns on sanitation and hygiene promotion with a community radio called Radio Janneh Koto in Gunjur, and the program is expected to last for few weeks.

He commended Oxfam America through Concern Universal for what he described as a humanitarian gesture, and urged others to emulate Oxfam America.

Manfred Bojang, disaster risk reduction project manager at Concern Universal, stated that 441 vulnerable families in Kombo South (from 15 villages) received an amount of D2000. These were families that were affected by the impact of the food crises, due to the 2011 crop failure.

According to him, the main goal of the project is to reduce the impact of malnutrition in children less than five years old, who are usually the most vulnerable in food crises.

“It’s pertinent to always look at the two components, when trying to tackle malnutrition. That is, while providing cash as a means of improving their food security, it is good at the same time to improve their public health, as these are the key factors to effectively tackling malnutrition.

The provision of cash will allow beneficiaries to have choice in purchasing household necessities.”

It is important to note that cash transfers can effectively create an impact in the lives of beneficiaries, when the local market is functioning properly, he further stated.

The second phase of the cash transfer will happen at the end of the month, which will be preceded by a post distribution monitoring exercise in order the gauge the impact of the response.

Patrick Mendy, the administrative and finance manager of NACCUG, said NACCUG has the capabilities and the mandate to distribute the cash for food directly to the beneficiaries, to ensure that all targeted beneficiaries are reached.

The funds and support were provided by Oxfam America through Concern Universal to give relief to those affected by looming food crises in the area. The response project has two (2) components (public health and emergency food security and livelihood). The public health component involves distribution to hygiene materials (which took place last week) and sensitizations (both radio and community).

Barabossa Mendy, a beneficiary from Sifoe village, with a family of six children, said that the cash will help her family and also give her the choice and freedom to purchase a variety of foods to provide a balance diet for her family.