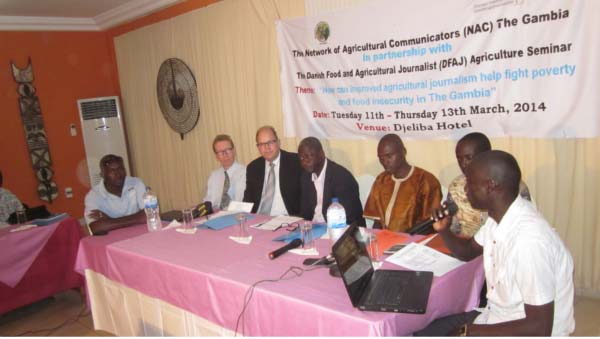 A three-day training of Network of Agricultural Communicators (NAC) in collaboration with the Danish Food and Agricultural Journalists (DFAJ), Thursday wrapped up at the Djeliba Hotel in Kololi.

The aim of the training was how to improve agri-journalism in helping to fight poverty and food-insecurity in The Gambia.

The overall objective of the seminar was to focus on local radio stations as medium of communication to help improve information for farmers since almost every home has a radio.

It was also to identify the barriers for the radio stations to find and air more relevant agricultural stories and to collect information that makes it possible to make a strategy for an education programme for agric-communicators in The Gambia, as well as to motivate NAC members to put more effort at informing farmers through their media.

Ebrima Jawara, Permanent Secretary, Ministry of Agriculture, in his closing speech, said the media play a key role in reporting on and analyzing the state and advancements in the agricultural sector.

He added that an enlightened citizenry was a key ingredient in national development process, adding that the seminar had prepared the journalists to face the challenges of accurate and timely reporting of agricultural matters, as they strive to achieve food and nutrition security.

“Your participation in this workshop at this time is very crucial, as we rely on the media to know what the players in the agricultural sector are doing to provide affordable wholesome food to the citizens,” PS Jawara said.

Therefore, he added, they depend on the media for credible information right from the source, saying it had been organised to help facilitate have access to that information and enable them to report truthfully, and on time.

Apart from treating the agricultural sector as a top priority, the Government of The Gambia, under President Jammeh clearly values and encourages free and independent media, he said.

“I encourage you all to maintain a healthy relationship with the Department of Agriculture, Communication, Extension and Education Services. They have a wealth of experience, information and invaluable archive material relevant to your field of journalism,” he disclosed.

The Permanent Secretary noted that the Ministry of Agriculture Website is also another tool the media and other stakeholders could use to get the most updated information on farming related matters.

Mr Jawara called on journalists to use the internet to corroborate information given to them by their sources, stating that they should not personalise issues that become personal ignore logic, the truth and will cloud their judgment.

“If need be, stay away from stories that are too personal to you,” he advised.

He thanked the Danish partners for their support, while assuring them that they would always get government support and thanked them for financing the workshop.

Amadou Jallow, President of Network of Agricultural Communicators thanked the participants for taking their time and attended the important seminar, while urging them to put good use of the training and called them to be unite.

The development of agriculture is the business of everyone, he said, adding: “As participants, we should make a follow up to see whether what we learn is been put into practice.”

Speakers on the occasion included Madi Ceesay, who spoke on behalf of the GPU, and Sang Mendy, senior officer of the Network of Agricultural Communicator and also a member of the GPU, both expressed similar sentiments during the closing ceremony.

Sainey Marena, senior reporter with the Standard Newspaper, gave the vote of thanks.