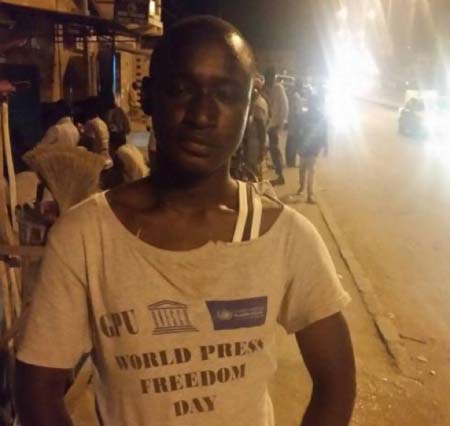 Even before the press conference started, journalists were intimidated by a crowd of supporters; the greater number of them belonged to the United Democratic Party (UDP) and a few from the National Reconciliation Party (NRP) and the Gambia Moral Congress (GMC).

From the beginning, we were even wondering what type of press conference the event was because the aggressive-looking supporters heavily outnumbered the journalists.

After all the statements from Ousainou Darboe, Hamat Bah and Mai Ahmad Fatty, the leaders of the UDP, NRP and GMC respectively, I was the first to ask my two questions. As soon as I introduced myself as Foroyaa newspaper journalist, I was continually interrupted by the supporters.

I could hear them say, “He is sent by Halifa Sallah’. It was hard to put my questions across because of the harassment and interruptions. I could hear my colleague journalists telling the wild supporters “please allow us to do our job” but they never accepted.

My questions were directed at Darboe and Fatty. To Darboe, I asked him for clarification and the question: ‘What causes the split from the coalition since it looks like the tactical alliance he mentioned was part of the options Halifa mentioned last week in his press conference.

Darboe clarified the differences saying they split because others including the PDOIS, NCP, PPP, and GPDP are not in for tactical alliance but to contest as independent candidates which they cannot do because they don’t want their parties to die. Fatty answered that Adama Barrow whom I used in my question as a reference is one but that cannot be applied to all the constituencies in the National Assembly election. It was from here I started to face more intimidations.

At the end of the press conference, while I was still in the room directly standing opposite Mr Darboe, who was flanked by Mr Bah and Mr Fatty, a young man approached me from behind saying: “Why not you go and ask Halifa Sallah?” I kept quiet but he repeated it again and I told him “I am here as an independent journalist representing Foroyaa newspaper, not Halifa”. He insulted me. He continued to harass me. This happened right in front of the 3 leaders.  More people came to the scene and a colleague from GRTS Radio, Abdoulie Sey, held me and took me downstairs.  The insult on me and my mother intensified. Some could not understand what happened yet they were following and insulting me; I was later held by two police orderlies of the ministers. As I was coming downstairs, the party supporters followed me shouting: “Why should you insult Mr Darboe”?  I never insulted Darboe though.

As Sey was still holding me towards the highway, they followed me. This time one of them hit me but I tried to defend myself.  Then they came in a group to attack me including women and one who eventually scratched me with her fingernail at my neck leaving me with bruises.  They torn up my shirt and I also suffered internal shoulder pain too.

As larger crowds continued to approach me on the highway, I was forcefully pushed into one of the taxes packed on the roadside. This vehicle was obstructed by the supporters; they don’t want it to move so that the driver can ask me out.