My shepherd and I

God has always been the shepherd of His sheep Israel. Even though He had handed over the role to prophets and kings, He had never relinquished hold. His people have always been the sheep of His pasture. Actually, shepherds are home-sprung everywhere, though there are good as well as bad ones. Kings in ancient days played a dual role of deliverer and protector of God’s people; but none really could play the role better than God Himself.

Shepherding is a God-given occupation exercised at all levels of human endeavour. The people God puts under our care are not mere ‘no-bodies’ and should not be treated as such. God places the responsibility of the have-nots on the shoulders of those who do. We are each other’s keeper. God requires us to cater to the needs of the less fortunate amongst us because when we do, it is as if we have done it to Him. (Matthew 25:25)

King David had gathered ample experience as a shepherd boy, to describe the relationship the sheep have with their shepherd and then transposed it to his relationship with God, whom he considers his Shepherd. If you are not familiar with shepherding you may not think highly about it, yet it revolves around total dependence. The sheep is entirely and totally at its shepherd’s mercy. It trusts in his judgment, goodness and ability to size up the danger and risks involved. He knows the areas where he would not venture with his flock for fear of scavenging wild animals and robbers. If the sheep has no confidence in its shepherd, the relationship would be deeply flawed. Cooperation, which is essentially built on mutual confidence, is made difficult.

David assuredly calls God his Shepherd. He wrote: “The Lord is my Shepherd I shall not be in want.” (Psalm 23:1) Anything he desires he gets with no effort. How do we know? David knows God as a Provider. Listen to his (the sheep’s) viewpoint. “He leads me beside the still waters.” “He restores my soul.” “He guides me in the paths of righteousness for His name’s sake.” “I will fear no evil,” even in the worst of circumstances.

Jesus’ viewpoint is taken from that of the shepherd. He says the shepherd’s position is at the head of the flock, not at the back. The shepherd takes all the risks; all the sheep need do is to follow. When the sheep is sick he nurses it; when it goes astray, the shepherd abandons the ninety-nine others in search of just one. And when he finds it, he puts it on his shoulders and brings it home. In addition, he throws a party for the occasion.

Every sheep is valuable in God’s eyes and like the shepherd, he will go all out in search of any lost sheep, to ensure that it comes back home to the fold. Whenever one sheep returns, having abandoned its old way of life, there is joy in heaven. (Luke 15:7) Our Lord Jesus declared that none of His would be lost. (John 6:39) They may go astray for a while but in the end, having been sought after and found, they would realise that life is much better in the fold, in the shepherd’s view.

Being sheep is really an effortless life; one that we should be thankful for. Think for a moment, nothing could be more blissful! All our burdens and worries are borne by the Shepherd, the Great Shepherd. As sheep, all our needs are provided for twenty-four hours a day, seven days a week. Needless worrying about where our next meal would come from. That is the shepherd’s responsibility. And so, day after day, our livelihood is assured. We prosper and are blessed on top of it.

Has it clicked? Is there something that we have been doing wrong all this time; wanting to lead rather than be led? How on earth could we have missed it all these years? Do you see how our self-effort bids have succeeded in only stressing us out, resulting in sickness, frustration and discouragement which makes way for the evil one to molest us the more?

Because we lack faith in the written Word, and have not believed in the assurance God has given us to live a glorious life under His watchful eyes, life for us has been challenging. God calls us to rest while He works on our behalf. Isn’t that a glorious life to live? That is what the finished work is all about! The Good Shepherd has given His life for His sheep! Join the flock! 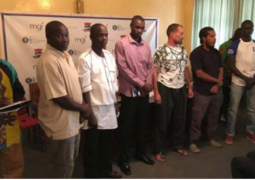