Another up-coming Gambian artiste, Banja Wally Mbye, has worked very hard as a young musician to launch another album entitled "Awliya-al Ellaahi Inne Maridum". The album which contains five tracks is expected to be launched on Saturday 24th April at the Paradise Suites Hotel starting from 5 pm onwards.

In a chat with Entertainment on Wednesday, Banja Wally said the album is a compilation of Arabic religious songs blended with Penia.
According to Wally, his album has come to support Islam and to praise Allah and his beloved Prophet Muhammeh (SAW).

The young Gambian artiste called on all Muslims to come and attend the launching, adding that the album focuses more on the Islamic religion.
He thanked Haruna Drammeh and Anty Amie Lette of Paradise Suites Hotel, Baboucarr Sanyang of Star Printing and Modou Sowe for their wonderful support. 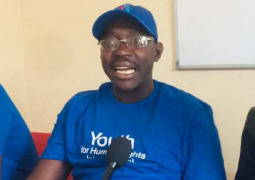