Ensa Badjie and Tijan Badjie are being tried for conspiracy to defeat justice and interference with witness, destroying evidence, abuse of office and deceiving witness.

Testifying under cross-examination, Suso told the court he knew that he was brought to the court in the absence of his lawyer, which his lawyer was not happy about.

Suso added that he gave information to the panel of which Ensa Badjie was the head, when he (Ensa) was the crime management coordinator of the Gambia Police Force, further stating that the information he gave to the panel was correct and true.

When Ensa Badjie put it to him that he was recorded by Burama Dibba and Benedict Jammeh, Suso denied it until when they played the recording in court, and maintained that he gave information to the panel headed by Ensa Badjie.

Susso also denied going to the accused person’s office. He said that he only went to the Police headquarters on two occasions, when he was called to answer in connection with an alleged SIM card found in his cell.

When asked whether he was once convicted for drug-related offences in 2001, Suso said he would not answer to that question because the accused person was confusing the court.

However, he was asked by the trial magistrate to answer the question to the best of his ability, as it was a cross-examination.

Suso then said he was convicted in 2001, and was later pardoned by the President.

Ensa Badjie further challenged that Suso’s pardon was revoked in 2007, because he gave false information to a public officer when he (Ensa Badjie) was the Inspector General of Police.

Musa Suso denied making phone calls while serving his prison term, adding that he was not aware that David Colley was prosecuted for feeding inmates with a dead bull, because he was not the authority to know that. 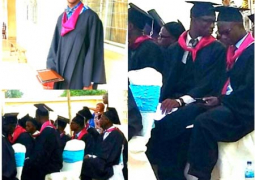