Musa Bah appeals for government support to improve his garden

Musa Bah, an active gardener in Bush Town Central River Region Sami district has appealed to the government and agricultural agencies to help him improve his 100 by 100 meter garden where he planted more than 300 cashew nuts.

Mr bah said he also grow mangoes, oranges, lemon, cassava, tomatoes, pumpkins, potatoes and guava in the garden.  “The garden contributes in fighting against climate change, provide a conducive environment and create food and income for people,” he said.

He said the garden has been helping him, his family and the people of the area in their daily food consumption, saying he also use the profits he gets from the sale of fruits and vegetables to pay his children’s school fees.

“But now, I am encountering several challenges, especially during the dry seasons when access to water will be very difficult.”

He said the lack of a proper well, fence, and water pumping machine is posing a serious setback on the progress of his gardening venture. He called on the youth to engage in agriculture to contribute to food security in the country. 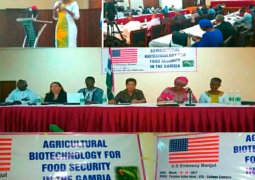 Workshop on biotechnology wraps up