The murder trial involving one Kalilou Bojang proceeded on Monday at the Special Criminal Court with the testimony of the fourth prosecution witness.

The accused, Kalilou Bojang, was alleged to have murdered one Cherno Jallow, a watchman at St. Therese’s Primary School on 4 October 2009, a charge he has denied

Testifying as the fourth prosecution witness, Nobere Jatta told the court that he knew the deceased, Cherno Jallow, as both of them worked as caretakers at the St Therese’s Primary School in Kanifing.

The witness stated: “On 4 October 2009, I woke up in the morning and my fellow watchman, Seedy Sanneh, and one Sedibbeh told me that Cherno Jallow was lying outside.

“I went to the scene, I found the deceased lying down with blood oozing from the nose and the face, but he was breathing at the time,” the witness told the court.

The witness further adduced that four minutes after his arrival at the scene the deceased passed away, adding: “I rushed to the house of the school principal, Mr Francis Faye, and informed him about the incident.

“We went back to the scene but we did not meet the deceased there and we were informed by one policeman that the dead body was taken to the RVTH hospital in .”

The case was at that juncture adjourned till 18 April 2011.

Lawyer Mboge should be taken to hospital orders high court 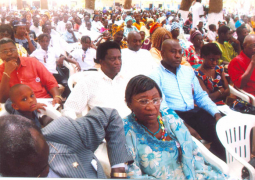