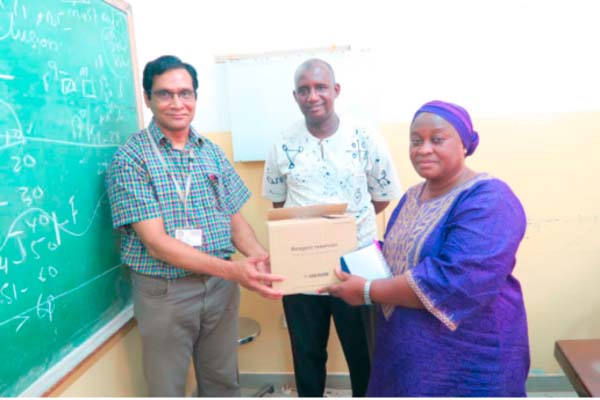 The leading Health Research Council in West Africa to save lives and improve health across the world, MRC, Thursday boosted the Ministry of Health and Social Welfare with the donation of Colorimeters to be shared with five government health facilities in the country, for Clinical Chemistry analyses of cerebrospinal fluid CSF in aid of meningitis diagnosis.

The ceremony was held at the Edward Francis Small Teaching Hospital, graced by the Director of Nursing and Midwifery Services on behalf of the Minister of Health and Social Welfare.

The mission of MRC Gambia is to deliver innovative, world-leading research aimed at reducing the burden of illness and death in low- and middle-income countries, supported by an enabling research environment.

It is also to maintain the ability to attract and retain the highest calibre of staff by ensuring that MRCG’s reputation for scientific integrity, quality and excellence is preserved.

According to a press release by MRCG, the Colorimeters donated would be shared among five Government health facilities in the Country.

The release further stated that the handing over of equipment to these public health facilities along with training of their laboratory staff is part of the Unit’s commitment to strengthening surveillance of invasive Haemophilus influenza type B Hib infection in The Gambia.

The project seeks to understand the current epidemiology and microbiology of invasive Hib disease in The Gambia and help to facilitate the microbiological processing and testing of patient specimen in order to identify causative organism(s) of meningitis and their antibiotic sensitivity.

World day of Health and social justice, Many congratulations for a Free Gambian Independence