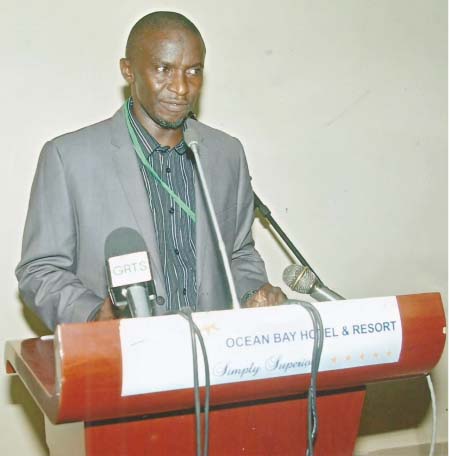 Momodou L. Kassama, Director of the Department of Parks and Wildlife (DPWM), who doubles as the chairman of the West African Network of Marine Protected Areas (RAMPAO), has described Marine Protected Areas (MPAs) as important tools for the protection of the marine ecosystem in maintaining critical habitats necessary for the dynamic functioning of the ecology.

According to him, the network aims to protect and conserve marine biodiversity for socio-economic enhancement of member countries, as well as promote the exchanges and mutual learning, among others.

It was also to creating synergies for functional and effective operation and strengthening capacity to better advocate for timely and effective implementation of RAMPAO’s set targets, both at the national and international level, he said in an interview with this reporter.

He added that The Gambia through the Department of Parks and Wildlife is the first English-speaking country to take the helm of RAMPAO’s affairs for the next 18 months.

“The network was founded in 2007, with 27 Marine Protected Areas members located within the sub-region of the West African Marine Eco-region, which comprises Mauritania, Senegal, Cape Verde, Guinea Bissau, Guinea Conakry, The Gambia and Sierra Leone,” he added.

The current MPAs are spread as follow: 12 in Senegal, 4 in Gambia, 5 in Guinea Bissau, 3 in Guinea Conakry and 3 in Mauritania out of the seven member countries of the eco-regions.

The MPAs currently cover approximately more than 2,722,595 hectares, with a coastal water protected rate of 12.7 per cent, compared with the world average of 7.20 per cent.

Mr Kassama revealed that there were only four government Marine Protected Areas in the country, but since government is taking a new paradigm shift in conservation of biodiversity in the country, things are now shifting from state management into a community protected management.

This, he went on, was a big achievement in increasing protected area coverage to contribute to meeting Aichi target 11, which he described as public private partnership for sustainable protection of the ecosystem.

This was testimony of RAMPAO being a network of one vision and mission, he continued.

There are geographic areas of the network, three Biosphere Reserves, one located at the border between Mauritania and Senegal, and about 1/3 of the eighteen existing marine protected areas in the seven countries involved.

The network seeks to promote exchange of mutual learning and skills, while on the other hand creating synergies for sustainability of marine resources for generations yet unborn, he said.

He added that MPAs are the richest biological areas in terms of biodiversity, and the RAMPO secretariat would work closely with authorities and relevant stakeholders to ensure more MPAs are created and strengthened to meet the UNDP target goals.

In 2010, RAMPAO was officially recognised by 15 ministers from the seven states, leading to the establishment of a credible institution which seeks to promote its value as a contributor to the implementation of international commitment of states regarding the preservation of the coastal and marine zone.

The Gambia is taking leadership of RAMPAO at a very crucial time, a point in which the network is well-known and ready to launch some of its most important projects.

He, therefore, urged a task committee be instituted to make their work vibrant.

“One of my tasks as chair is to link RAMPAO member MPAs, ecosystems and critical habitats that are necessary for the renewal of fisheries resources, the rehabilitation and restoration of critical habitats and conservation of biodiversity.”

RAMPAO is a network aimed at ensuring within the West African marine eco-region composed of Mauritania, Senegal, Cape Verde, Guinea Bissau, Guinea Conakry, The Gambia and Sierra Leone, the maintaining of critical habitats necessary for the dynamic functioning of the ecology.

He recalled that one of the objectives of hosting the 6th general assembly meeting in The Gambia, was to review the progresses that have been made over the last two years and to develop a work-plan with agreement on targets that are achievable and result-oriented in conserving and protecting the sub-regional marine resources.

“There exists Memorandum of Understanding between RAMPAO and the Abidjan Convention to help manage and protect MPAs at biological and ecological levels of each member country.”