The Minister of Youth and Sports, Sheriff Gomez and his entourage will on Wednesday, 19th May 2010, commence the second phase of their tour which will take them to parastatals and private sector within the Greater Banjul Area, according to the press release from the Ministry of Youth and Sports.

The itinerary of the visit is expected to be released to the rest of the regions, UTG, and the media which will be communicated in due course, the release added.

As a result, the Ministry of Youth and Sports used the opportunity to urge all youth and sports bodies, as well as sports stakeholders to turnout in their large numbers for these meetings.

It could be recalled that the Ministry of Youth and Sports under the stewardship of Honorable Sheriff Gomez has just concluded the first phase of similar visits which took them to Local Government Authorities in the Greater Banjul Area, to interact, exchange ideas, highlight challenges and collectively proffer solutions. 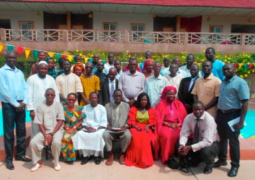