Thousands of mourners and sympathizers including members of the sports fraternity on Friday afternoon converged at the old Jehwang Muslim cemetery to pay their last respect to a fallen veteran sports icon Alhagie Badou Jasseh.

The 65-year-old former veteran referee and also a well-known caf referee instructor who devoted the better part of his life to sports, particularly in refereeing, died at the Royal Victoria Teaching Hospital after a brief illness.

Badou Jasseh, widely called uncle Badou, was reported to have returned home from Monrovia, Liberia, on Sunday evening where he attended a caf instruction course with a bitter complaint of a muscle pain shortly after landing at the Banjul International Airport where he was met on arrival by two of his sons - Bai Ebou Jassey and Sulayman Jasseh, said Bai Ebou, who is understood to be the eldest son of the late Badou Jasseh.

The late Badou Jasseh was immediately taken to the Ahmadiyya Hospital for treatment where he underwent a blood test, according to Bai Ebou Jasseh, who is still struggling to come to terms with the sudden demise of a man widely regarded as one of the committed and dedicated sports personality in Gambian sport.

He later proceeded to the Royal Victoria Teaching Hospital for further treatment where he met his untimely demise on Thursday at 1:00pm, said Bai Ebou, who is said to be very much close to his late dad.

Edrissa Jarju, an adapted son of the late uncle Badou since 1982, reflected back on the days he spent with Badou Jasseh, saying: "He (the late uncle Badou) was a very honest gentleman and a very good adviser who always stick to his words and spent most of his time working with the Gambia Football Association (GFA).

Jarju also described the late Badou Jasseh as a well respected individual who is always contented with what he had and had a true love for everybody around him, his family in particular.

"With regard to the family, my step dad took maximum care of all the entire family members including those who depended on him for fatherly advice outside the family. Among his best friends were two gentlemen Dodou (Capy) Joof and Edrissa (Chiko) Njie."

Edrissa Jarju, who spoke to Pointsport in an interview with this reporter at the deceased's residence in Pipeline at the weekend, said: "Jasseh was a devoted Muslim who used to pray five times a day."

Among the crowd at the funeral was Saint Mbye, former director of Youth and Sports, who showered praises on the late sports figure, saying: "The late Badou Jasseh was a man who contributed immensely towards sports development in the country representing The Gambia in all major sports internationally."

Saint Mbye, who described the demise of one of the country's prominent sports figures as a great loss to the entire sports fraternity, said Badou was an outstanding sports personality throughout his life.

The secretary general of GFA, Jammeh Bojang, described the demise of the late Badou Jasseh as a terrible loss to Gambian football, saying the late Jasseh had been a seasoned Gambian referee who had earned the respect of both Caf and FIFA as a result of his magnificent achievements in refereeing.

"He was made a Caf referee instructor and also the chairman of the Gambia Football referees committee," he noted.

"Jasseh's vacuum will be very difficult to fill," Jammeh Bojang said, adding that the late Badou Jasseh had devoted all his time towards the uplifting of the referees committee and has since been able to train so many Gambian referees who are now high-level Caf and FIFA referees.

Jammeh, on behalf of the GFA prayed for the departed soul to rest in perfect peace.

Hassan Cham, a retired referee, said The Gambia has lost "a very important and dedicated sports personality as far as refereeing in the country is concerned."  Jasseh involved everybody in the field of refereeing, even the female folk, he noted.

Mr Cham also joined a host of previous speakers to describe the sudden demise of the dedicated sports figure as a great loss not only to The Gambia but also to the continent given the fact that the late Badou Jasseh had also trained a lot of African referees who are now doing extremely well in the field of refereeing.

Prior to his departure, the late Badou was both the head and the heart of the GFA's referees committee taking up a leadership role as the chairman.

He was also an inspirational figure behind the successes of some of the country's finest referees having taken them from scratch to the highest refereeing level.

He was a qualified Caf referee instructor as well as a FIFA registered referee for a number of years.

The late Badou Jasseh, who officiated in two Africa Nations Cup finals, is survived by a wife and three children.

Editor's note:
The entire management and staff of The Point Newspaper would like to seize this opportunity to pay condolence to the family of the departed soul.

We pray that the Almighty Allah grant him the best place in heaven, Ameen! 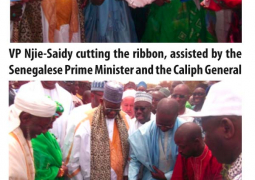