Magistrate J.A. Effim of the Brikama Magistrates' Court recently presided over a criminal case of rash and negligent act brought against one Ousman Barry, a resident of Brikama Newtown.

According to the particulars of offence, on 3rd August 2009, at in the Western Region, the accused Ousman Barry ride a motor cycle with a registration number BJL 7325 MC in a rash and negligent manner, thereby caused the death of one Mr. Adama Jarju.

When the charge sheet was read to him in the language he claimed to understands, he pleaded not guilty.

The Police Prosecutor, Cadet ASP Samateh applied for an adjournment on the grounds that he would send the case filed to the Attorney-General Chambers for legal advice.

Meanwhile, the defendant was granted court bail in the sum of D25, 000 with a Gambian surety.

The case was adjourned to 9th November 2009. 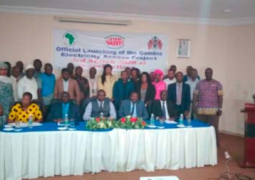