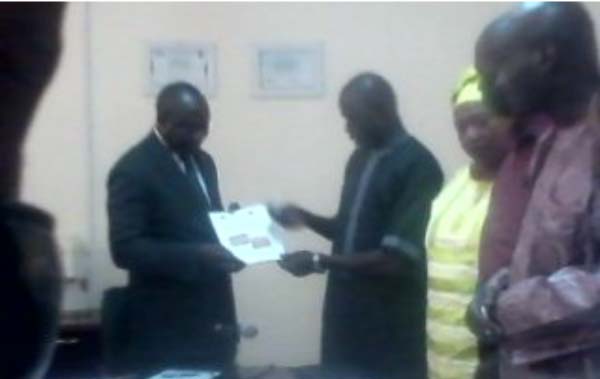 The Ministry of Trade, Industry, Regional Integration and Employment (MOTIE) Wednesday handed over Farmer Field School Manuals and Field Guides to the Ministry of Agriculture (MOA), at a ceremony held at the MOA Conference room in Banjul.

In his handing-over statement, Abdou Kolley, Minister of Trade, Industry, Regional Integration and Employment, said the materials were prepared with the support of the Sector Competitiveness and Export Diversification Project under his ministry, to serve as resource documents for the promotion of good agricultural practices and to ensure quality enhancement for export in groundnuts, sesame and cashew.

“As the ministry mandated for the development of agriculture, we deemed it fitting for MOA to take custody of these important documents for onward distribution to your technical departments, projects, UN technical agencies and NGOs that intervene in the sector,” he added.

He said his ministry would continue to collaborate with stakeholders and support all national processes aimed at increasing Gambian exports, which the manuals seek to achieve.

He reiterated that all documents were developed through an extensive and participatory process, involving all the key stakeholders, including experts from the Ministry of Agriculture, development partners, farmers and farmer organizations, as well as Civil Society Organizations working on the three crops.

Eight manuals were developed under the project to assist in the training of selected participants from the cashew, sesame and groundnut sectors to implement the Farmer Field Schools, he went on.

Minister Kolley added that in the process, five master trainers were trained for each of the three sectors, who further trained forty core trainers to train farmers in the field.

Twenty farmer Field Schools have also been established underthe project for each of the crops (cashew, sesame and groundnuts) throughout the country to conduct farmer training during the last cropping season, Minister Kolley disclosed.

Three lead institutions were also identified to coordinate the implementation of Farmer Field Schools in the three sectors: Agribusiness Services and Producer Association (ASPA) for groundnut, National Women Farmers Association for Sesame, and Cashew Alliance of the Gambia for cashew, he said.

He added that the manuals developed for each of the crops include, a Field Guide for the Production of High Quality Groundnut, Sesame and Cashew in The Gambia; Guidelines for Quality Enhancement and Food Safety in Export Crops in The Gambia (Groundnuts, Sesame and Cashew); Training Farmers in Farmer Field Schools - A Manual for Master Trainers and Planning and conduction of farmer training in Farmer Field Schools - A Training Resource Manual for Core Trainers.

“As I hand over the Manuals and Field Guides, I trust that they will be used in your ministry’s efforts to boost agricultural production and by extension meet our collective objective of increasing quality Gambian exports,” he stated.

Solomon Owens, Minister of Agriculture, in receiving the manuals, said he was delighted as this was very significant in the drive towards quality in agriculture production.

Minister Owens described the extension approach using farmer field books as very significant as the Ministry of Agriculture and department have been battling with extension methodologies and approaches as the old ones are no longer working and when the approach of the use of farmer field production was introduced, there were sceptics from among older generations.

He said his ministry was trying to introduce the concept and approach of the methodology whereas farmers would be trained, adding that he would be looking at developing farmer research methods.

The MOA Minister said groundnut, cashew and sesame are the only three field export crop the country has, while describing the value of sesame in the world market as attractive.

He called on farmers to take the lead in training their peer farmers in providing information to them and in ensuring that quality is assured in the crops they produce.

Dr Omar Touray, Quality Focal Point, said quality assurance frameworks had been developed for all three commodities along the value chains, adding that the implementation had already started.

He said that to ensure quality and safety; they had to start from where it was most important, which is the level of production.

The major challenge now is toxin, which is why the whole intervention is centred on how to adopt and implement good agricultural practices to minimise the risk of toxin to the level where products would be accepted both locally and internationally, he stated.