There have been more revelations in the case involving Ensa Badje, the former police chief, and two former military officers, Lt. Col Mam Matarr Secka and Major Kuluteh Mammeh, at the Special Criminal Court in .

Testifying as the ninth prosecution witness (PW9), Commissioner Biran Mbye told the court that he knew the accused persons, and that on 6 May 2009, while at the Kanifing Police Invention Unit, he received a call from the 1st accused, Ensa Badjie, asking him to find out whether Sergeant Edrissa Sey was there.

“I confirmed to him that Sergeant Sey was around, and the 1st accused, Ensa Badjie, instructed me to send Sergeant Sey to go to Gacem and asked for one Assan Sarr and identify himself to him”.

PW9 added that he instructed Sey accordingly, and upon Sey’s return he reported to him that he (Sey) received money which he, the witness, saw, in the sum of D25,000, which Sey said was meant for Ensa Badjie.

He also said that he knew one Babucarr Khan, also a deputy commissioner of police and, in 2009, the 1st accused, Ensa Badje, called him and asked him to instruct Babucarr Khan to arrange a truck, and go to Gacem and collect cement from there.

Also testifying was one Sergeant Edrissa Sey, a police officer attached to Kanifing P I U, who also told the court that he knew the 1st accused, Ensa Badjie.

“He gave me D25,000, and told me to come the next day to collect another D25,000, which I did the following day, and Biran told me to keep the money for Ensa Badjie, he would come,” he continued.

He said when Ensa Bajie came, he delivered the monies to him in the office of Commissioner Biran Mbye.
The case continues on 16 January 2012, for cross-examination. 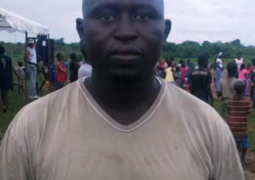