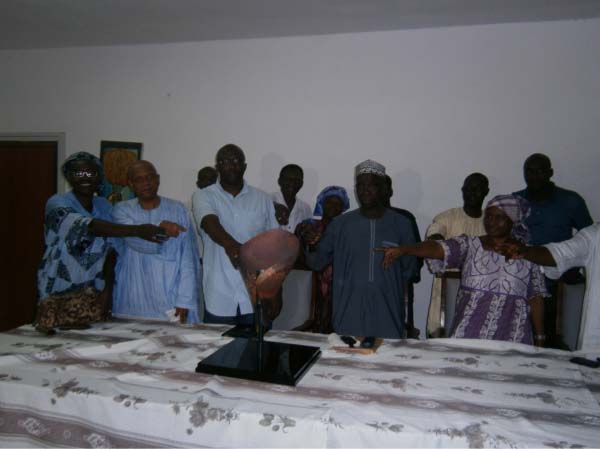 Momodou Dibba has maintained his position as president of the Gambia National Olympic Committee (GNOC) at an unopposed balloting held at the Olympic House on Bertil Harding Highway in Bakau last Saturday.

Mr Dibba has headed the National Olympic Committee for the past two years.

The election, applied to all executive bodies of the Committee - who all went unopposed, was witnessed by delegates from various national sports associations (NSAs).

In his inaugural speech, Mr Dibba reflected on his achievements in the past two years, saying that after two years in office with an unblemished record of achievement, his nomination for re-election by majority of the NSAs was a clear testimony of the quality of leadership they have at the GNOC.

The previous congress which brought him to office gave him the opportunity to fulfill his ten-point agenda, which was a promise to all NSAs, he said, adding that it is the basis of his record performance in having tremendous support from the Executive Bureau and National Sports Associations that gave rise to his re-election for another term.

Dibba further implored on all national associations to cooperate and support his executive to achieve the desired objectives and goals of the Olympic movement in The Gambia.

“My victory is for the sporting fraternity and together we will strive for improved performance for sports development in The Gambia,” he pointed out.

Referring to where he stopped in his previous tenure, Mr Dibba said he would continue to roll out his development strategies to further consolidate the gains they have already registered.

The GNOC Executive Board shall continue to give the necessary guidance and support to National Sports Associations to improve their performance on sports excellence and development of the athletes.

Their strategies, which include the administrative and technical course for National Sports Associations, will be intensified during 2013-2016, he said, adding that they would also inspire and encourage the young entrants in the Executive Board of the GNOC to take a leading role in the activities of the Board.

Mr Dibba said further that the GNOC would continue to harmonize and maintain good relationship with all National Sports Associations to enable them take advantage of the benefits the Board is able to offer, to extend their solidarity and cooperation with sister NOCs and International Federations, such as the Commonwealth Games Federation, Islamic Solidarity Sports Federation and Olympic Solidarity, as well as to mobilize resources for the development of sport in all its facets in The Gambia.

He also said the strategies also include supporting the efforts of Gambian athletes to put up good performance to excel in their quest to bring glory to the nation and maintaining for GNOC a reliable, competent and forward-looking workforce relevant to their desired aims and objectives, among others.

He finally thanked President Yahya Jammeh for his material and moral support to sport and for creating the sporting environment for all Gambians to partake and contribute to the development of sport in the country in the spirit of friendship, fair play and justice.

He also thanked all the associations for their participation and urged opponents to join them and work together as an Olympic family to achieve their dreams for the country.

The co-opted members are Marie Samba Christine, Haddy Njie and Modou Drammeh as well as a media representative in the name of Namory Trawally.