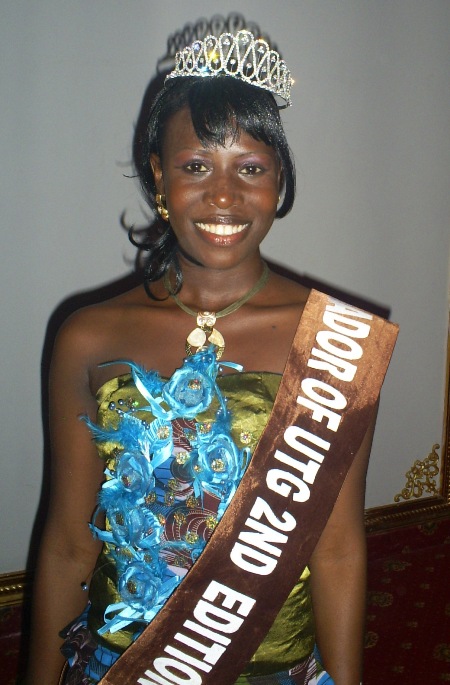 Miss Teneng Jitteh scooped the crown of the Ambassador UTG 2nd edition, 2010 at the Jerma Beach hotel in Senegambia on Saturday.

Miss Teneng Jitteh who is a first year student of the Law school in the University of the Gambia was contesting for the title and crown with other fourteen contestants. Miss Teneng Jitteh has always proved to win the hearts of the audience right from the preliminary of the contest held at the Paradise Hotel.

As the theme for this year's Ambassador of UTG 2nd edition which is "Expression of Feminine Dynamism" signifies, the contest was not only that of beauty but to showcase beauty with excellence.

There was an opening dance by all 14 contestants then followed by individual catwalks and the revelations of platforms.

Thereafter, each contestant danced to the music of her choice.

After a while, seven contestants qualified for the final round and they were, Khadijatou Jallow, Mariama Manneh, Ramatoulie Jammeh, Fatou Camara, Ndey Faal, Khadijatou Manneh and Teneng Jitteh. They were later asked to answer some questions by the judges.

Teneng Jitteh clinched the crown by answering one delicate question to the last dot which is: What is feminine dynamism?

No Blanket Bans on Culture!