Medina FC will clash with Bantaba FC in the final of the 24-team junior nawetaan tournament organised by Serrekunda East Sports Development Organisation.

Both finalists have won their semifinal matches at the Serrekunda East mini-Stadium.

Medina FC advanced to the final after defeating by 2 goals to one in the semifinal game played at the Serrekunda East mini-Stadium on Monday.

Medina FC took the lead in the 19th minute when defender Alieu Jatta put the ball into his own net, while Alasan Sanneh made it 2-0 for Medina FC in the 53rd minute from a sensible strike.

Sanna Sambou scored ’s consolation goal in the 71st minute of the game from a penalty spot.

In the other semifinal encounter played on Sunday 9 January 2011 at the Serrekunda East mini-Stadium, Bantaba FC beat Milan FC 3-2 on post-match penalty shootout after the game ended 0-0, to also book their place in the final.

The committee will decide the date for the final. 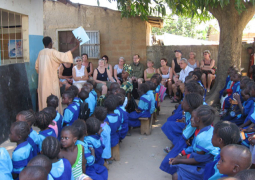