One Ensa Badjie, who was charged with stealing a Hyundai vehicle at the Kanilai Family Garage, yesterday opened his defence before Magistrate Alagba of the Kanifing Magistrates’ Court.

In his defence, Ensa Badjie told the court that, between 2008 and 2009, he was working at Kanilai Family Garage, adding that he was the presidential convoy mechanic, including weapon assembling and mounting.

He adduced that he was working with one Pa Bojang, who was the Garage Manager.

He stated that one Joseph Sapo and Ali Sour were once managers at the garage.

He was reminded by his counsel that one Alagie Secka had testified that he (the accused) had sold a vehicle to him, and that he paid him D120,000.

He told the court that he does not know Alagie Secka, and denied stealing an unregistered vehicle marked Hyundai belonging to the Kanilai Family Garage.

He also denied selling a vehicle to Alagie Secka at D90,000, who was alleged to have been refunded D50,000 by the accused when the accused could not register the said vehicle.

Badjie further testified that on 12th January 2010, the former Inspector General of Police, Ensa Badjie, Solo Bojang and Umpah Mendy visited the garage at 10 a.m and said it was the President of The Republic who ordered all the workers at the garage to leave immediately.

He added that the said vehicle was involved in an accident during the AU summit, and was parked on the grounds of State House for a long time.

He further said that one Captain Musa Jammeh was in charge of the said vehicle with other vehicles related to Kanilai Family Garage together with one Ousman Gibba.

He further narrated that Musa Jammeh had told him in the presence of Ousman Gibba that it was the President who told him (Musa Jammeh) to tell the accused to take the vehicle from where it was stationed to repair it, and take it for his own use.

He testified further that Musa Jammeh telephoned him and said that the President had told him to tell the accused to collect the vehicle to repair it, because the accused had no vehicle to use to go to work.

He said he did not collect the said vehicle on the day he was asked to collect it.

Still testifying, he revealed that he told Musa Jammeh to tell the President to give him a better vehicle because he could not repair the said vehicle, adding that Bakary Gibba towed the vehicle from where it was stationed, and took it to the Kanilai Family Garage.

He told the court that Musa Jammeh gave him D15,000 to repair the vehicle, which he did, stating that he handed the vehicle to Landing Badjie and Ebou Badjie, panel beaters.

He adduced further that he showed the vehicle to Musa Jammeh after it was repaired, indicating that the vehicle was with him until 12th January 2010.

He told the court that the former IGP, Umpah Mendy and Solo Bojang came and met him at the garage at 9 a.m.

He testified that the former IGP, Ensa Badjie, told him to say nothing, and that they would see what would happen.

He narrated that all the workers were called and told that it was the President who said that the mechanics at the garage stole all the spanners at the garage.

He added that some police officers searched the compounds of those who were accused of stealing the spanners, but did not find anything.

He said he was also searched, but nothing was found.

Inspector Mballow stood in for the IGP. 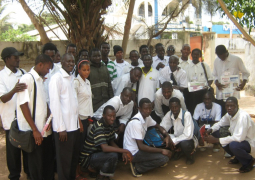