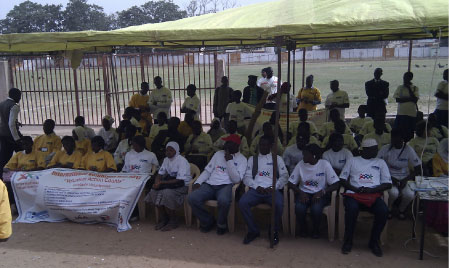 The United Nations Volunteers (UNV), in collaboration with Volunteers Network – The Gambia (VolNet-Gam) and other partners, yesterday celebrated the International Volunteer’s Day in the country.

The 2012 International Volunteer Day celebration focuses on raising global and local awareness of and recognition for volunteers and volunteer-involving organizations.

The celebration began with a parade from Shell Petrol Station on Kairaba Avenue to the Serrekunda West Mini Stadium. The overall global message for the celebration this year is “Volunteer Action Counts”.

Speaking on behalf of the UNV executive coordinator, UNV programme officer Sara Mussilla said this year they are celebrating the commitment and the impact that volunteers are demonstrating to make the world a better place.

She said every year hundreds of millions of people around the world give their time and share skills with society.

She said volunteers are driven by the desire to contribute to the well-being of their society without expectations of material reward.

She underscored the important role played by volunteers, saying she has seen how UNV supported UN volunteers in peace-keeping missions to bring stability to societies damaged by violence, among others.

“Volunteerism plays a significant role in achieving the Millennium Development Goal,” said the UNV Programme Officer, alluding that the world is facing extraordinary challenges and that ‘they can be me if we commit ourselves to uphold volunteerism’.

Adama Beyai, chairperson of VolNet-Gam, said the celebration is also meant to raise global awareness and recognition for volunteers.

He adduced that VolNet-Gam was formed in 2012 to bring all volunteer networks to harmonize the activities of various national volunteer organizations.

It is also meant to protect the interest of volunteers thus giving them due recognition to contribute to national development, he added.

The celebrations also witnessed the award of certificates by the WFP to various volunteers in recognition and commitment of their services to the community.

Hamat welcomes release of prisoners but…