The Minister of Interior, Ousman Sonko last Friday 12th June 2009, presided over the promotion of 44 newly promoted senior officers of The Gambia Immigration Department, ranging from cadet assistant superintendents to commissioners at the Police Headquarters in .

Speaking at the ceremony, Minister Sonko advised the newly promoted officers to be loyal to the state and live up to expectations, stressing the need for honesty.

He stated that they would not mind to demote anyone who does not measure up to expectations.

For his part, the Inspector-General of Police, Essa Badjie said the promotion of the officers was based on the trust and confidence the leadership has on them. He thus called on them to live to the task ahead of them.

IGP Badjie said the security of this country will never be compromised at any given time and called on all the security apparatus to unite and work for peace and harmony.

In his welcoming remarks, the Public Relations Officer of the Immigration Department, Chief Superintendent Lamin Jatta said "This is the first time in the history of his department to make promotion and decoration of officers of this magnitude". He commended the Minister of Interior Ousman Sonko and his ministry for making this possible and President Jammeh through the Personal Management Office (PMO) for their timely approval of these positions.

He pointed out that the promotions were conducted by a board made up of the command and the regional commissioners. He noted that it was based on merits, hard work and dedication to duties, as well as discipline and seniority. 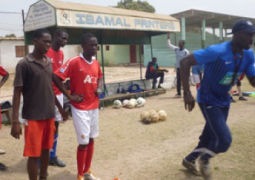