The principal of s , Martin Gomez, has been re-elected as the president of the Gambia Secondary School Sports Association (GSSSA) at the association's triennial congress held Saturday at the Regional Education office in region 1, Kanifing.

Gomez, who was elected unopposed, will handle the position for another three-year term.

Lamin K. Marong, principal of Muslim Senior Secondary, was elected treasurer, while the position of internal auditor was handed to Francis Gomez.

Speaking to reporters, the newly re-elected president, Martin Gomez, applauded the congress delegates for re-electing him as the president of the association for another three-year term and urged members of the association to give them full support to attain their objectives.

He thanked Trust Bank Limited and Coca-Cola Gambega for sponsoring the athletics and the football and volleyball championships.  He also appealed to the sponsors to increase their sponsorship package.

"The Ministry of Basic and Secondary Education (MOBSE) and the Ministry of Youth and Sports have been instrumental in the previous years and I hope they will continue to give more support to the association. I also want them to increase their subvention," Gomez pointed out.

He also appealed to member schools to settle their subvention. 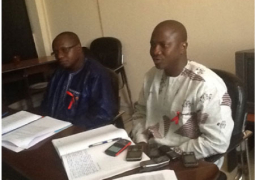