Marakissa at the weekend defeated Busura 1-0 in the ongoing Kombo Central District football tournament at the Busura playground.

Omar Colley gave Marakissa the winner in the 26th minute of the game.

Meanwhile, were held to a goalless draw by in-form Chimo United at the Brikama Box Bar Mini-stadium on Sunday.

Both sides created numerous goal-scoring opportunities but failed to capitalised on them and thus the game ended goalless. 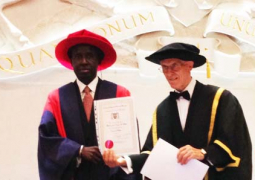