The accused persons were alleged to have, sometime in May 2009, at the NIA head office in , conspired among themselves to cause physical injury to the persons of Lamin Kabou and Lamin Sima.

It was further alleged that, in May 2009 at the NIA head office in , with intent to do some grievous harm to Lamin Kabou, they unlawfully wounded Lamin Kabou by beating him with fist blows, an electric cable and metals.

Tijan Ndure, in his testimony, told the court that he is resides in Brikama Gidda and he is a marabout and Quranic teacher, adding that he knew all the accused persons.

"On 31st May 2009, I was in my house when one Abdoulie Sanneh came and proposed to me to do business or to work with the NIA by collecting drugs from a drug dealer and resell them," he told the court.

"I told him that I'm not going to involve myself in drug dealing," he added.

Ndure further told the court that, on the following day, Abdoulie Sanneh called him to meet him at Brikama-Kebunjang highway, and he drove his car to the place.

"Upon my arrival, I saw three gentlemen namely, Saikou Ceesay, Lamin Hydara and Lamin Bojang in a black jeep," he added.

"Abdoulie Sanneh again told me that one Karamo Drammeh was ready to do business with us, and I told him that ‘why not call Karamo to come instead of calling me to come here," he said.

He added that Abdoulie later spoke with Karamo over the phone to confirm that Karamo was on his way coming, and that he asked him to allow him to park his car properly.

Ndure revealed that after parking his car, he called one Babucarr Cham, an NDEA officer, to provide two NDEA officers for him.

"I joined them at the highway again, and one Lamin Hydara produced an enveloped containing €15,000 and gave it to Karamo Drammeh, and collected the drug from Karamo," he told the court.

Lamin Hydara, the witness added, told them to move to a safer place, and Hydara drove the car up to Kubujang Mandina where Hydara pulled out €15,000 from a plastic bag, and handed it over to one Ansuman, who in turn told him that this was the cost of one kilo.

"Some minutes later, I saw two vehicles running at full speed coming toward us, and they suddenly stopped, and I saw the 1st accused, Lamin Darboe, coming out from the car with a gun, and he pretended to open fire and asked everybody to ‘stop where you are’, otherwise he would shoot," the witness added.

Still testifying, the first prosecution witness told the court that the place was later crowded because of the noise of the gunshots, and two people among the crowd produced their warrant card as narcotics officers, whom he later came to know as Lamin Sima and Lamin Kabou.

He said the two demanded to check the plastic bag, because they were narcotics officers and that they suspected the said plastic bag.

Ndure revealed that Lamin Hydara was the one holding the plastic bag, and that one Omar Jammeh asked the narcotics officers to go away.

"Omar later beat Lamin Sima on his chest and they started a push and pull, and again the 1st accused, Lamin Darboe, pulled out the gun threatening that if they failed to stop he would shoot them.

"I was handcuffed by the first accused, and later handed over to the Brikama Police Station where I was placed in the cell, and later transferred to the NIA headquarters," he added.

The case adjourned to 8th December 2010. 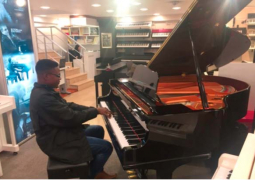