The well-attended inauguration ceremony which was witnessed by a score of high dignitaries, such as the Director of Youth and Sports
Malang Jassey, the Chairman of Father Gough Sports Foundation, the brother of Sunny Alade Joiner Arome Joiner, among other top dignitaries, according to the Co-coordinator of the foundation Bye Malleh Wadda, is part of their efforts to rejuvenate basketball in the country and expressed hope that it will help expose athletes to higher standards.

The Minister of Youth and Sports Sheriff Gomez who spoke about his ministry's efforts to attain excellence in sports expressed gratitude for the valuable contribution rendered by Father Gough in ensuring the establishment of two high standards basketball courts in Banjul and Manjai, respectively.

"The Manjai Basketball Court will also include volleyball court, and other sporting areas, which is estimated to be around the region of D6m," said Bye Malleh Wadda.

"The government of the Republic of The Gambia under the inspirational leadership of President Jammeh, my ministry and the entire sporting fraternity are leaving no stone unturned in making sure the game of basketball is given the support it deserved.

"We will continue to nurture athletes so that we can continue moving sports in the country at the youth level and it should be the responsibility of every Gambian, including those in the diaspora," said the Youth and Sports Minister, who was speaking to the gathering at the inaugural opening ceremony of Sonny Alade Joiner Basketball Court in Manjai.

Father Gough thanked all those who have participated in the inauguration ceremony. He further took time to recognise the support and contribution of Sonny Alade Joiner, whose significant contribution in the development of basketball during his time with the Gambia National Basketball team as Captain has served as a source of motivation and inspiration for a good number of young athletes in the country and beyond.

Father Gough used the occasion to commend the Coordinator of his foundation, Bye Malleh Wadda for his tireless efforts in ensuring that the whole initiative is successful. 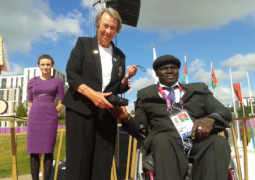