A man called Abubacarr Jallow was yesterday arraigned at the Kanifing Magistrates’ Court, charged with attempt to commit a felony.

The charge sheet stated that the accused, Abubacarr Jallow, on 29 December 2011, at Serrekunda, in the , entered into the house of one Ousainou Wuazani with intent to commit a felony therein to wit stealing. 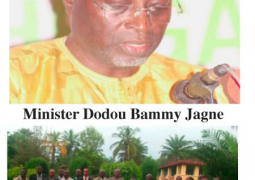